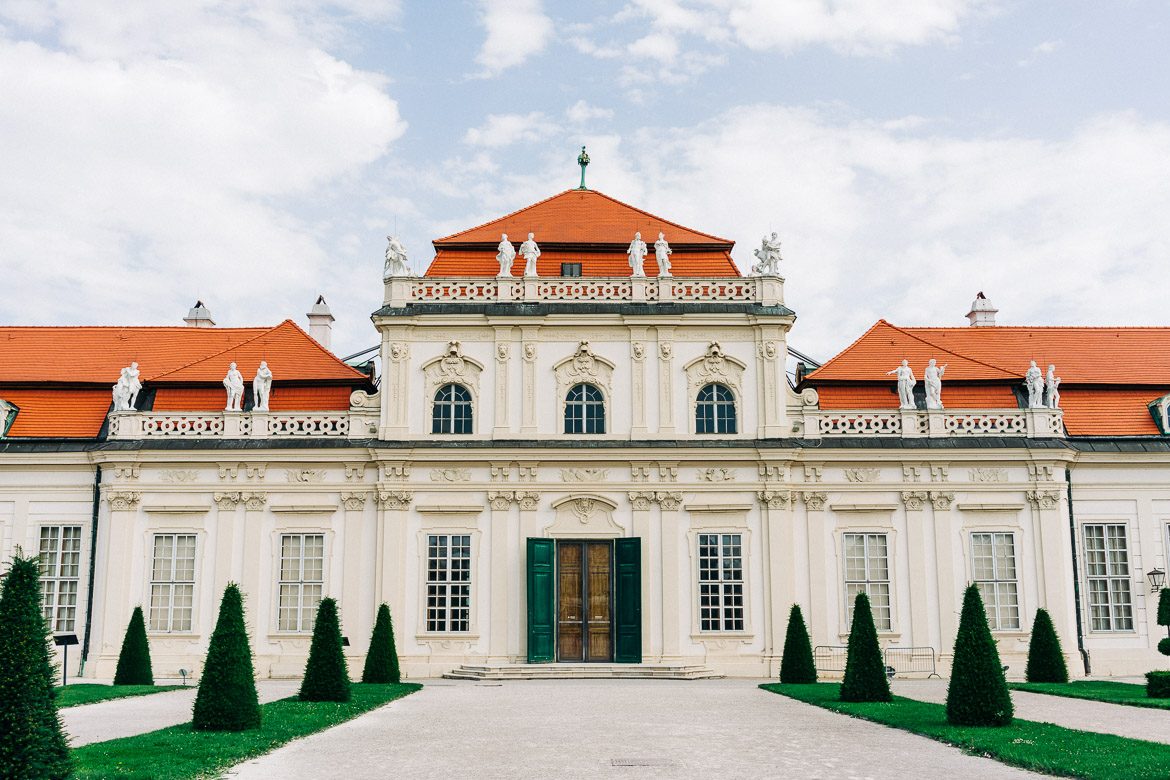 In the spring and summer, take advantage of Vienna’s manicured rose garden, Volksgarten.

Art lovers will enjoy the Kunsthistorisches Museum, a fine art museum known for its opulent architecture and traditional Viennese cafe.

Bookworms will love the Austrian National Library, which contains many old and precious books, four Venetian globes, and pages on display documenting the education and reign of Emperor Maximilian. The State Hall of the National Library is the largest Baroque library in Europe.

I thought the most beautiful of Vienna’s many churches was Votivkirche, a white double spire church filled with stained glass windows. It was pretty quiet inside both times we went, so you can enjoy it in peace. St. Stephen’s Cathedral, on the other hand, is always crowded and there’s even a gate inside to separate the tourists from the parishioners.

Two other churches we recommend are Augustinerkirche, built in the 1300s for the Habsburgs, and Karlskirche, which is best viewed from across the fountain in which you can see its reflection. Most churches in Vienna are free, but Karlskirche is 8 euros to enter.

One of the best things to do in Vienna (a tip from my Austrian friend) is to climb the south tower of St. Stephen’s Cathedral to a panoramic viewpoint in the steeple. From here you can see the intricate roof of the cathedral as well as the entire city below, even as far as Belvedere Palace in the distance.

It opens at 9am and costs 5 euros. I recommend getting there no later than 9 so you can be the first one in. There are 4 windows at the top, 3 of which were wide open on the morning I went (sometimes they can be closed due to wind).

You have to climb 343 steps up a narrow spiral staircase to reach this viewpoint. If you don’t think you can climb that, there is an elevator to a lower platform in the north tower, which you can take for 6 euros.

We also visited Schonbrunn Palace and Belvedere Palace. These are very different and both worth visiting. Don’t skip one just because you already went to the other.

Schonbrunn’s imperial rooms have been preserved, whereas Belvedere’s have not, but I think Belvedere is more beautiful on the outside and it houses a collection of exclusively Austrian works of art, including The Kiss by Gustav Klimpt, along with several of his other famous paintings.

Schonbrunn Palace was given to Hapsburg Empress Maria Theresia, the mother of Marie Antoinette. There are nearly 1500 rooms in the palace, but only a selection of them are open to the public. We recommend taking the Grand Tour instead of the Imperial Tour. It’s worth the extra 4 euros to see 40 rooms instead of 22, especially since the best are saved for last.

Schonbrunn receives an average of 10,000 tourists a day and tours are capped so as not to overcrowd the palace, so it’s best to buy your ticket online in advance. We’ve heard stories where people arrive at 10am to buy a ticket and end up having to wait till 4pm to enter!

Since Schonbrunn opens at 8am but the grounds open earlier, buy a ticket for the 8am time slot online, then arrive at 7am on the day of to explore the grounds and take all your outdoor photos while you have the gardens to yourself. In the summer, this is also the coolest part of the day.

Belvedere Palace is less crowded but I still recommend arriving no later than opening time at 9am. I arrived just before 9 and had the gardens to myself, but literally 5 minutes later a huge tour group showed up.

Pick up a map of the museum in the ticket office and head straight to the Klimpt room on the second floor, which will be the first to become crowded, then afterwards you can leisurely make your way back through the other rooms.

Another early morning activity is to walk by the stables where the Lipizzaner stallions live. If you’re lucky you can see them being led from their stables to the Spanish Riding School, where they’ll start their morning training at 9:30am. Aaron went out one morning at 8am to walk around the old town and bumped into them. He even got to touch one of the horses!

The only place in Vienna that we thought was a total tourist trap was the row of restaurants at Naschmarkt. Go to Altes Akh, the “old campus” instead for casual outdoor dining. There are several Viennese restaurants here with much more reasonable prices. It’s a very popular place with locals, so go early to get a table. One of the restaurants is even a microbrewery. It’s a bit of a hidden gem our Austrian friends introduced us to. We would have never found it on our own.

We really recommend taking a free walking tour. We took one with Good Tours. It’s not actually free, we tipped 15 euros, but we thought it was completely worth it. Vienna’s tour guides are required to be licensed and complete two years of training, so it was one of the most informative walking tours we’ve been on.

We learned about Mozart, Hitler, Viennese food and coffee culture, Baroque architecture, the Hapsburg empire and the Austro-Hungarian empire, Viennese wine, and even the latest political gossip.

The first stop on the tour was this vantage point from which we could see Hotel Sacher, home of the famous Sachertorte, on the left and Staatsoper, Vienna’s world renowned opera house, on the right.

If going to an opera at the Staatsoper is high on your list, book in advance and try to get a seat instead of a last minute standing room only ticket. The latter option is popular with budget conscious travelers, but you need to arrive 2 hours early and stand for a 4 hour opera. Our Austrian friends said just buy a seat or take the tour. They also recommended Volksoper, the people’s opera.

We simply ran out of time on this trip, but we’ll certainly be back to see the opera and ballet. Find out why we’re coming back to stay longer in Vienna!