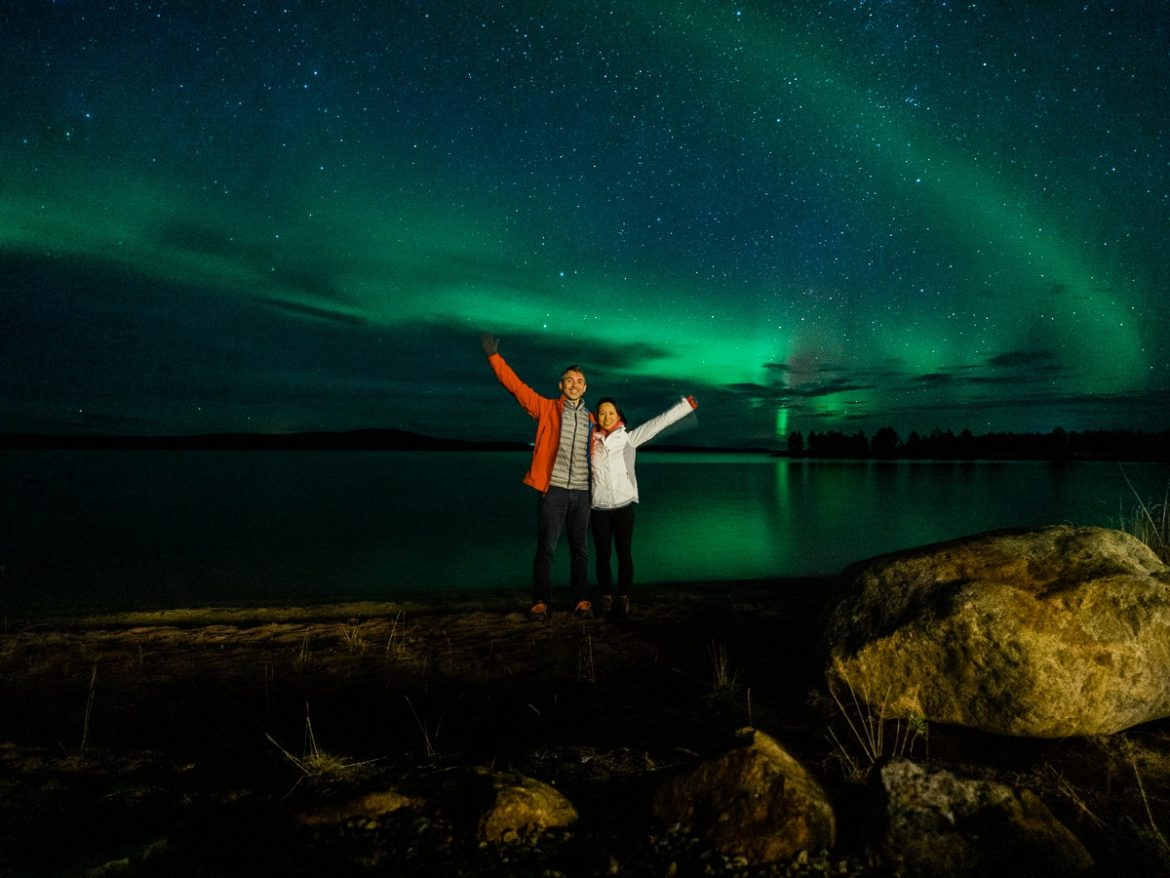 In early October we traveled to Finnish Lapland to try our luck at spotting the Northern Lights on the banks of Lake Inari, a tiny town under the aurora belt. We flew into Helsinki in the morning. The view from my window seat was so beautiful – rows and rows of evergreens splashed through with yellow.

We paid to store our bags at the train station, visited the National Library and Helsinki Cathedral, enjoyed a hot bowl of pho at a Vietnamese restaurant, and boarded our sleeper train to Rovaniemi, the capital of Lapland.

We booked a private upstairs cabin for two people with en suite bathroom and shower. The cabin was 45 sq. ft with bunk beds, fresh linens and towels for two. If you book in advance, you can get a pretty great deal, especially considering you save a night on accommodations in Helsinki.

The train arrived early in the morning. We rented a car from Alamo at the train station and hit the road by 8 AM for our drive to Inari, a town in the far north of Finland. We didn’t know if there would be a good grocery store there, so we stopped at Lidl on the way to pick up snacks and fruit, but there turned out to be a really nice supermarket called K Market in Inari with fresh produce, hot food, and reasonable prices (the same as in the rest of Finland).

You can also fly from Helsinki to Ivalo, but the rental car was cheaper from Rovaniemi and the highway in perfect condition, so it was a pleasure to drive. Without stopping, it took four hours, and we saw wild reindeer along the way.

We stayed at Wilderness Hotel Inari, one of the top accommodations in the area. They offer aurora cabins by the lakefront – these are individual domes with glass windows that face north, so you can lay awake in bed and keep an eye on the night sky without having to venture outside. Splurge on the aurora cabins if you’re on vacation, but since we travel for months on end, we stayed in one of the regular hotel rooms instead, for half the price and only a one minute walk to the lake.

Our windows didn’t face north, so we had to go outside to check the sky, but this is where the All-sky camera came in handy. It’s a live webcam that shows the sky above Kevo, a town just north of Inari. If you see Northern Lights activity in Kevo, chances are high they’ll be visible in Inari too. The website also predicts the probability of auroras – a yellow dot is enough to see them on a clear night. I refreshed it religiously the entire time I was in Finland.

Our forecast actually started out pretty abysmal. Out of a four night stay, three days were rainy or cloudy, but on our second to last night, after pouring relentlessly all day, the sky suddenly cleared at 8 PM. We walked outside, saw a faint green glow in the sky, and suddenly realized we were looking at the Northern Lights!

They were pretty amorphous at first, but their glow grew stronger as the sky darkened, and closer to midnight, they “danced” a bit more. Our hotel turned off all the outdoor lights for us, and the lake provided a vast black mirror perfect for reflections.

It was so cold we could only stay outside for fifteen minutes at a time before running inside to warm up. Each time we went out again the lights would be somewhere new, and their shape would be different. The show lasted at least four hours until we went to sleep at midnight.

I was able to capture some decent photos on my Sony A7II with a Samyang 18mm F2.8 lens. It’s not my favorite lens, but it’s the widest angle one I have and I wanted to capture the entire sky. I didn’t have a tripod, so I placed my camera on boulders, an upside down boat, or the deck, and tilted it up towards the sky using a soft camera bag for support underneath.

Some of my photos came out blurry, or a bit crooked, but they’re all treasured, because whenever I look at them, I remember how much fun I was having.

Go north. Rovaniemi, the capital of Lapland, is not ideal for a short trip because it’s a fairly sizeable city with lights on at night. As you go farther north, the towns get smaller and smaller until they’re just a blew blocks across, so there’s very little light pollution. You can also try a ski resort like Ylläs that turns off all the lights at night for aurora viewing.

Give yourself enough time. The Northern Lights are visible every other clear night, and not every night is clear. October, when we went, was pretty rainy, so I’m glad we stayed four nights. Snow in the winter can also cloud the skies, so I would recommend a minimum of three nights.

Stay near a lake if you can. A lake reduces light pollution because it’s pitch black at night, and also serves as a reflection pool. When the lights are bright enough, this creates a beautiful otherworldly effect.

If you have flexibility and can head to Lapland at a moment’s notice, you can monitor the weather and solar activity. I reccommend the Finnish Meteorological Institute’s website for local weather forecasts and SpaceWeatherLive’s Twitter feed for updates on solar flares. Right after heightened solar activity, you have high chances of seeing the Northern Lights.

Don’t forget to remove your polarizer, or any other filter for that matter. You want to let in as much light as possible, and polarizers block light.

Make sure your battery is fully charged. This may seem obvious, but batteries drain faster in subfreezing temperatures, especially when you’re frequently previewing photos on your screen.

Use a wide-angle lens so you can capture as much of the sky and landscape as possible. Anything between 14-20mm is good. I used an 18mm prime. Also choose a lens with a wide maximum aperture, like f/1.4, f/1.8 or f/2 and set it at the widest aperture possible. I could only go as low as 2.8 and it worked, but maybe my photos have more noise. With a wider aperture, you can use a faster shutter speed and have the best possible chance of freezing the motion of the Northern Lights.

If you don’t have something solid to balance your camera on, bring a tripod, even a mini one, and instead of pressing the shutter button, turn on self-timer mode so the camera doesn’t shake at all.

What if You Don’t See the Northern Lights?

Don’t despair. Lapland by day is stunning too. There is so much calm water with wonderful reflections and peaceful walking trails through evergreen forests. If you want to see fall foliage, go in September. Everything will be golden yellow. We just missed it in the first week of October. However, we caught the first snow on our last morning in Finland, so that was quite special.