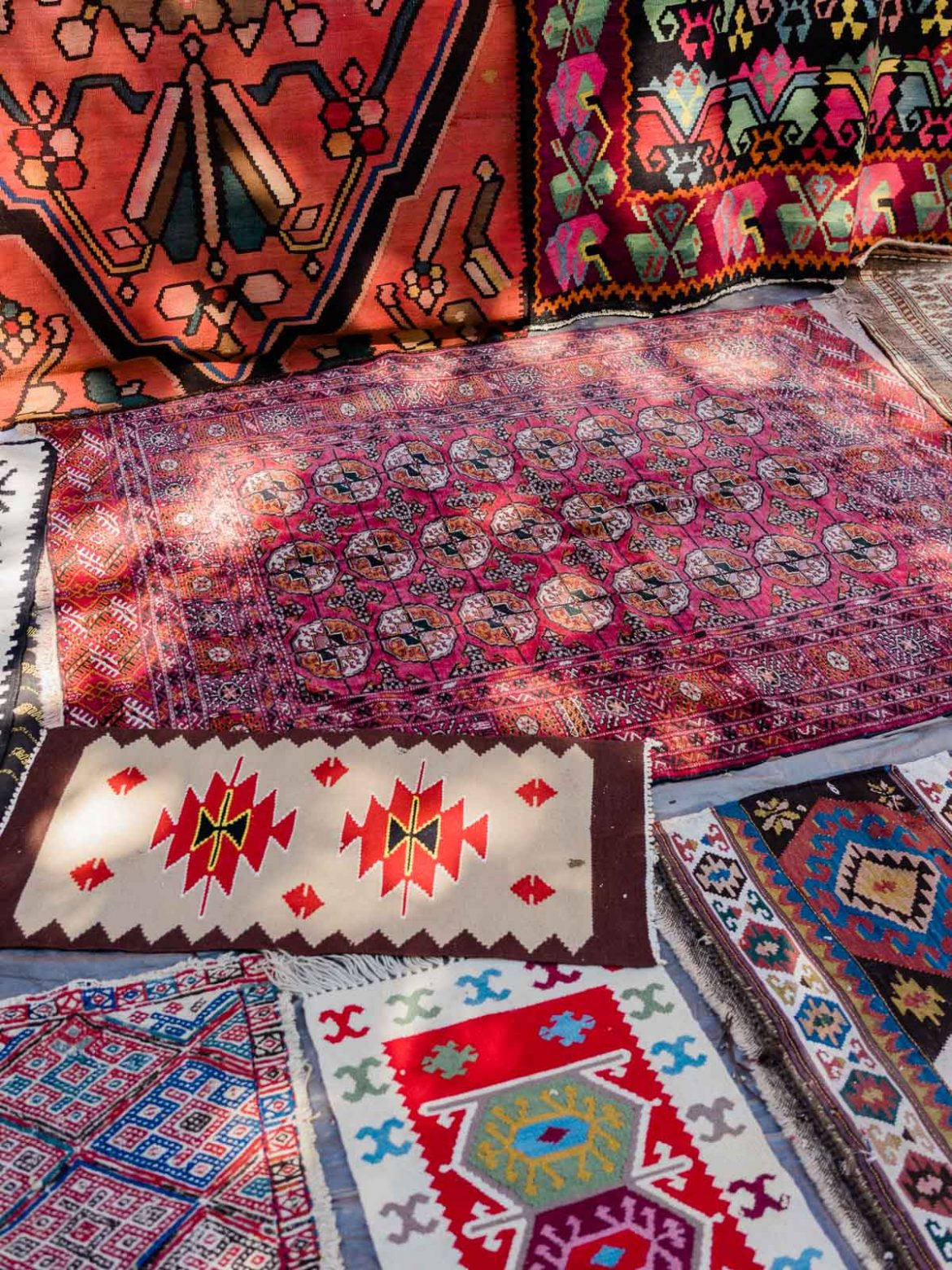 You can see Yerevan’s highlights in just a few days days if you’re not staying long, though we stayed two weeks to take it all in and do some day trips.

Wifi is fast and tap water is safe to drink. You’ll see many water fountains around the city – you can drink from these. Some places accept credit card, others only cash. While young people speak English, the older generation mostly speaks Armenian and Russian. Even American movies are dubbed over in Russian.

Two of Yerevan’s landmarks are the Cascade steps, which you can climb up for a view of the city with Mount Ararat in the distance. We recommend going for sunset.

Republic Square is in the center of Yerevan, with rose-colored buildings and a water fountain that puts on a musical light show every evening at 8pm.

How to Say Thank You

In every new country we go to, we learn how to say thank you. In Armenian it’s shnorhakalut’yun. If you have trouble pronouncing that, we were told merci is acceptable too.

Qatar Airways flies in and out of Yerevan with a layover in Doha for pretty reasonable prices. A sleeper train also connects Yerevan with Tbilisi, Georgia, but we don’t recommend it. It’s so uncomfortable you’ll hardly get any sleep. You can fly for just $50 more.

Armenia’s version of Uber, gg, is very cheap – only a dollar or two USD to get around Yerevan. We recommend gg even for day trips outside of the city. Rental cars are also pretty cheap but gas is high, and most gas stations only take cash, especially outside Yerevan. They won’t have an ATM either.

In terms of public transportation, there’s a metro, city buses, and marshrutkas, a sort of minibus, all costing about 100 Armenian drams, or 21 cents USD at the time of this writing.

Armenia may be one of the most affordable places we’ve ever been. You can get a kilo of beets for 25 US cents, or a lunch for two in a food court for less than $5 USD. Taking a gg from the airport to the city center is only $3. Our modern one-bedroom Airbnb right by Republic Square cost $455 for two weeks. Outside of accommodations, we spent $294 for both of us. Overall, that’s $27 per person per day.

We did some research and found out Armenia’s GDP per capita is on par with the Philippines, lower than Thailand, China, Serbia, and Bosnia, and only a little higher than India. Estimates vary, but 1/4 to 1/3 of Armenians live in poverty. Some of the buses, marshrutkas, and even ambulances say China Aid on them. Unfortunately these seem to be old and heavily polluting vehicles.

Our Airbnb host makes about $1500 USD a month as chief accountant of a swimming pool company, which he said is considered a pretty good salary in Armenia. He said police officers and doctors for municipal hospitals make only $400 a month.

Armenian food is very diverse, blending Middle Eastern, Russian, Georgian, and Asian elements in with their own. Herbs and salt are abundantly used in Armenian cooking. You’ll see lots of khinkali, borscht, lahmacun, lavash, grilled meats, braided cheese, dried fruits with nuts, and strings of walnuts dipped in grape juice, known as sujuk in Armenian and churchkhela in Georgian. The Armenian kind is better than the Georgian kind – the grape wrapping in softer and cinnamon spiced – so stock up on it here. A word of warning on Armenian cheese though – it can be incredibly salty and gamey tasting for the uninitiated.

Our favorite place to eat in Yerevan was Wooden House, a cafeteria style establishment with a new selection of homemade dishes every day and very friendly service. Lavash is one of several higher end restaurants near Freedom Square – their red pepper walnut dip is amazing. At SAS Food Court, you can see lavash being made in traditional ovens. For Western health food options like wraps and smoothies, try Eat & Fit Healthy Café.

Yerevan City is a huge grocery store in a historic building downtown. It carries everything – fresh lavash, an abundance of produce, Armenian wine, and weighable sections for nuts, dried fruit, spices, candy, coffee, grains, and cookies. The coffee department alone is worth seeing (and smelling).

One place you must visit is the Mergerian Carpet factory and museum. You need to call ahead to make a reservation for a tour in English. The Armenian rugs made here are dyed with all natural dyes, mostly from Armenia. Only indigo is imported from India. The yarn is spun, dyed, woven, and finished at the factory all by hand. If you want to buy a rug, you can bargain about 40% off the asking price. Our favorite ones were silk rugs that were priced at $75,000 USD. The silk knots are much tinier than wool yarn, so it takes a lot longer to make. The colors are more vivid and the silk feels so smooth.

The museum has some interesting old rugs in it. One rug was cut in half by a mother during the Armenian genocide and each half was given to her two daughters in the hopes that it would help them find each other. 50 years later the two sisters finally found each other in NYC with the help of this rug.

We even met the owner, who offered us coffee. He’s Armenian but grew up in New York.

Another place you can find carpets is the Vernissage outdoor market. All along one wall of the market perimeter are individual carpet sellers with rugs from Iran and Turkmenistan, old carpets from Armenian homes, some with the year woven into them, and extremely soft and rare ones from Afghanistan. You can learn a lot by talking to the carpet sellers, not just about carpets but about their lives. We met one couple who felt that life was more stable in Soviet times, and another man who had a flourishing carpet business in Syria but had to escape the war.

The Blue Mosque is one of Yerevan’s highlights. It has a turquoise blue dome with intricate Iranian patterns. Boasting lush gardens and benches to sit on, it’s a peaceful sanctuary.

There used to be ten mosques in Yerevan, but now the Blue Mosque is the only one remaining in Armenia.

The Armenian Genocide Museum is a must visit to learn about Armenian history both here and abroad. Give yourself at least 3 hours because there are over 40 long placards to read in the museum. I had to skim through some of them to finish before closing time.

We learned that what is now Eastern Anatolia in Turkey used to be Western Armenia. There are vintage photos of Istanbul, where there was a large Armenian community before they were forced out. The museum explains how Armenians fleeing or displaced by the genocide resettled in Syria, Georgia, Lebanon, Jerusalem, Canada, and other countries too, creating today’s Armenian diaspora.

Some of the documentary photography of the genocide is quite brutal and shows that a genocide clearly occurred. I only wish the museum didn’t say that Armenians were intellectually superior to the “backwards” Ottomans.

I recommend reading Encyclopedia Britannica’s account of the Armenian Genocide before visiting the museum to get your bearings first, since it’s so much information to take in.

There are two brandy factories in Yerevan offering a tour and tasting for 5000 Armenian dram ($10.50 USD), or a tour without tasting for 3500 dram. They used to be one factory but the state split them into two. One is called Noy and the other is Ararat. Noy is Armenian owned by an arm-wrestling world champion, and Ararat is French owned. We went on the Noy tour but also tasted Ararat brandy later. Both are very strong.

Noy has a cellar full of wine casks from the early 1900s, which were saved despite the factory being left in a state of abandonment before new ownership rebuilt it. The barrels are so large that wine is still being bottled from them. You can smell the grapes in the air. We thought this part of the tour was the most interesting.

You can also enter a tunnel from the cellar that runs all the way through the city to the American Embassy. Grapes used to be transported to the factory through these tunnels to keep them cool. There are also old black and white photographs of workers at the factory and of the restoration work, as well as furniture from prior owners and stories about them. The tasting at Noy includes a fortified sweet red wine and two pours of brandy, aged 5 and 10 years, water, chocolate, and apple and orange slices, which Aaron said made the brandy easier to drink.

There is a lot of national pride in Armenia and certain things are claimed as exclusively or originally Armenian, such as the “Armenian double knot” in carpet weaving, which is the same as the Turkish double knot. A saleslady in a nuts and dried fruit shop said the strings of walnuts dipped in grape juice are Armenian and that in Georgia they’re made “only with hazelnuts and not very good,” which was pretty funny.

To understand this, keep in mind that Armenia is a small country bordered by two nations which were past aggressors, Turkey and Azerbaijan. It’s also still trying to throw off Russian influence and emerge from a dark period in the 90s after the Soviet Union dissolved. Our Airbnb host said he hopes that Armenia will be the next Singapore.

Visiting in the Spring

We visited for two weeks in late April. The weather was cool but sunny and dry, with poppies blooming all over. It can be quite windy though, which blows pollen around, so if you come in the spring, bring allergy meds.

If you have more time, here are some amazing day trip destinations you can take from Yerevan.