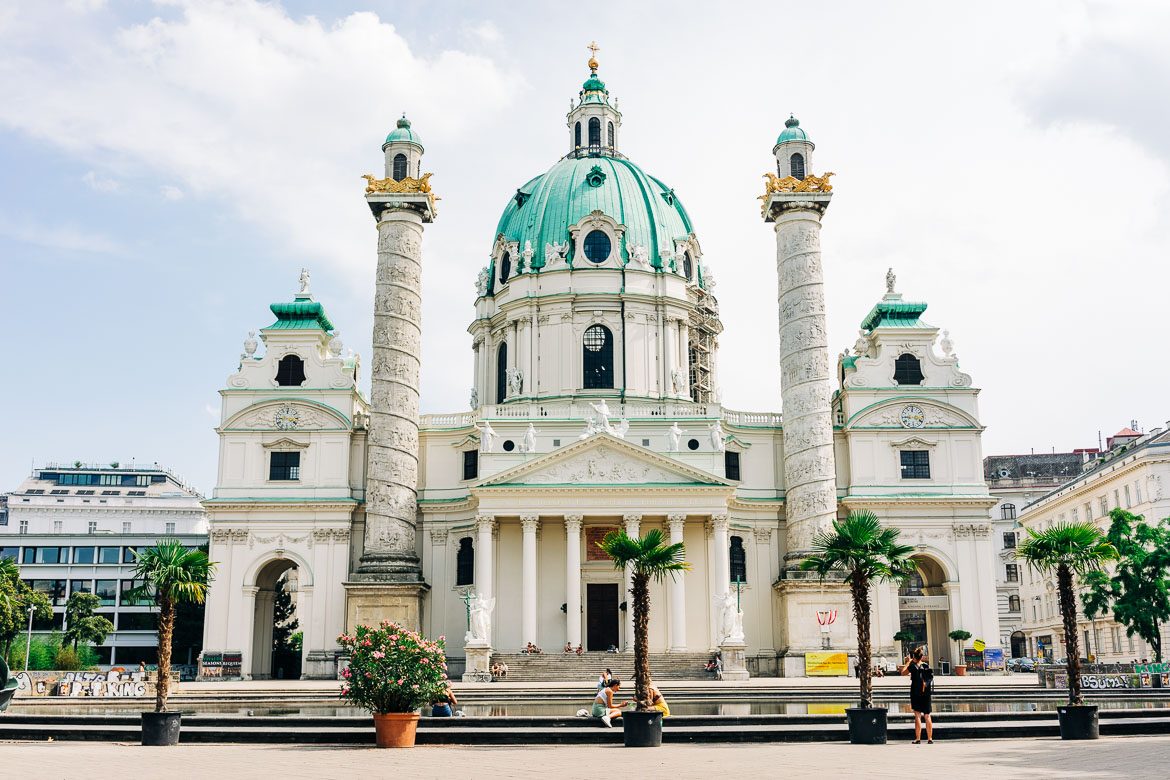 Three years into traveling all over the world, we were incredibly impressed by Vienna’s livability. It’s expensive but you get remarkable value for your money. The city is beautiful, clean, functional, and walkable, with a high density of cultural institutions, green spaces, and exquisite architecture. Find out our favorite sights to see in Vienna!

A High Standard of Living

We’ve now visited the Economist’s top 3 most livable cities — Vienna, Melbourne, and Osaka — and agree with Vienna’s number 1 spot. We don’t think Melbourne should be in the top 3 at all (higher priced housing and food, fewer cultural institutions, and not as well connected to the rest of the world). We lived in Osaka for a month and really enjoyed it, but Vienna more so. Here’s why.

Walking and getting around is really important to us when evaluating a city. We often go on hours-long walks, but like an efficient public transportation system for day trips out of the city center.

It’s enjoyable to walk everywhere in Vienna because there’s so much beauty around you, the sidewalks are well maintained, and parks provide shaded walking paths.

If you want to bike, there are bike paths all over the city and along the Danube, 1300 kilometers in total, and rentable Citybikes.

Finally, the tram, train, subway, and bus network will take you just about anywhere in Vienna. Their schedules are on Google Maps in real time, and you can rely on public transit to be precisely on time. Single journey tickets are 2.40 euros per person, but monthly passes are only 51 euros (I used to pay $85 USD in Boston, so this seems pretty reasonable to me) and an annual pass is 365 euros (only 30 euros a month!).

I mention Boston a few times in this article, the city we’re from. It’s our personal baseline for evaluating other cities in the world and simply an anecdotal comparison.

We found most of the people we interacted with in Vienna to be warm and polite. Random people we stopped on the street answered our questions and explained things to us in the most friendly way. It made for a very pleasant and welcoming environment.

We even read in a news article that every spring Viennese people volunteer to clean up the city for the start of summer tourist season. We haven’t heard of any other city that does that!

Our tour guide said that in cafés, Viennese people sit as far apart from each other as possible, but we think this is just a very thin veneer under which they are actually quite warm. We saw an elderly woman making sure she could have a whole booth to herself at McDonalds, but a little while later a man sat down opposite her and she was rather chatty with him.

Vienna has so many green spaces. Our favorites were Volksgarten, the rose garden, Lichtenstein Garden Palace, which has a pond and a beer garden, and of course the manicured grounds at Schonbrunn and Belvedere Palace, both of which are free. You’ll find people running, walking their dogs, reading, or just sitting to admire the scenery.

Our Airbnb for 5 nights was $305 USD, but you can get a nice, furnished one-bedroom apartment near the city center for 1200 euros a month, utilities included, on other rental sites such as HomeLike. This is cheaper than Melbourne but more expensive than Osaka. For us, it’s way cheaper than Boston, where a comparable apartment would cost at least $2400 USD a month, and that’s on an annualized basis not including furnishings or utilities.

Eating out in Vienna is cheaper than in other major European cities like London, Paris, or Amsterdam. When we met up with my Austrian friends for dinner at a typical Viennese restaurant, the cost for 2 mains, 2 beers, and an aperol spritz was 35 euros, tax included.

You’re not expected to tip in Vienna unless you simply want to for exemplary service, so the price you see on a menu is the final price.

Vienna also has several budget grocery stores, like Hofer (what Aldi is called in Austria), Billa (the name actually comes from the German word billig, which means cheap), and Spar.

We also liked the diversity in the population and food culture. Vienna’s population is 50% first or second generation immigrants. Within one block from our apartment were restaurants serving Russian, Japanese, Chinese, American, Turkish, and Icelandic food. Having just come from the Caucasus (quite homogeneous), it was a breath of fresh air to be in such a diverse community again.

People are also quite progressive here. Our first night in Vienna we happened upon Life Ball, an annual celebration/concert/party in support of people with HIV or AIDS.

The next day we walked right into a vegan food festival with tons of vegan food trucks and vendors selling raw bean-to-bar chocolate, date syrup, and vegan pesto. The dates from Saudi Arabia and Israel were particularly good. Many vendors travel to Vienna just for this event.

We also like that public trash cans include clearly marked recycling bins.

Because we cook so much, we value nice, full-service grocery stores with large produce departments. Vienna has a good selection of these, from the everyday affordable ones mentioned above to fancy high end ones with wine bars.

You can order a sandwich from any grocery store with a deli counter for less than 2 euros – about 1 euro for a vegetarian one with cheese, lettuce, and tomato, and a little more with your pick of deli meat.

Grocery stores do close on Sundays and holidays, of which there are many in Austria, so that’s just something to be aware of. The pastries and cakes at Vienna’s cafes can be expensive, but the ones at the grocery store are often just as good for half the price.

Austria is ranked the 3rd most peaceful country in the world and Vienna 6th in the world for personal safety. It’s perhaps the only big city in Europe where we don’t worry about terrorist attacks or walking around at night (knock on wood).

Viennese people are notably well dressed, especially the women. There are many local shops with handmade clothing, organic cotton/linen, traditional Viennese tailoring, and elegant walking shoes. Clothing here is on the expensive side (probably the only thing more expensive than in Boston), but high quality. Vienna’s fashion sense is an admirable antidote to fast fashion.

Vienna’s cafés aren’t popular because the coffee is good. In fact, the coffee is pretty mediocre according to our tour guide, but locals use cafés as a second living room. If you order a coffee you can sit in the café all day and nobody will pressure you to leave. Most cafés carry a selection of major international newspapers as well as cakes, because the Viennese tradition of a mid-afternoon coffee and cake break is alive and well.

Vienna’s air quality is not the cleanest in Europe because Austria still has diesel cars on the road. For example, its AQI is higher than Munich but still just fine.

Vienna has not completely banned indoor smoking in restaurants and bars, but our Austrian friends said there is hope a smoking ban will be passed soon.

The only real caveat to Vienna’s livability is the lack of air-conditioning in the summer. Vienna was experiencing an unprecedented heat wave the week we were there (early June). It should have been 75 degrees, but instead it was 90! Most apartments in Vienna don’t have air-conditioning (both our Austrian friend and our tour guide confirmed this) and even offices don’t always have it. Grocery stores do, but restaurants not necessarily.

Europe has been getting increasingly hot with global warming, so we would probably come back to Vienna in the spring and fall.