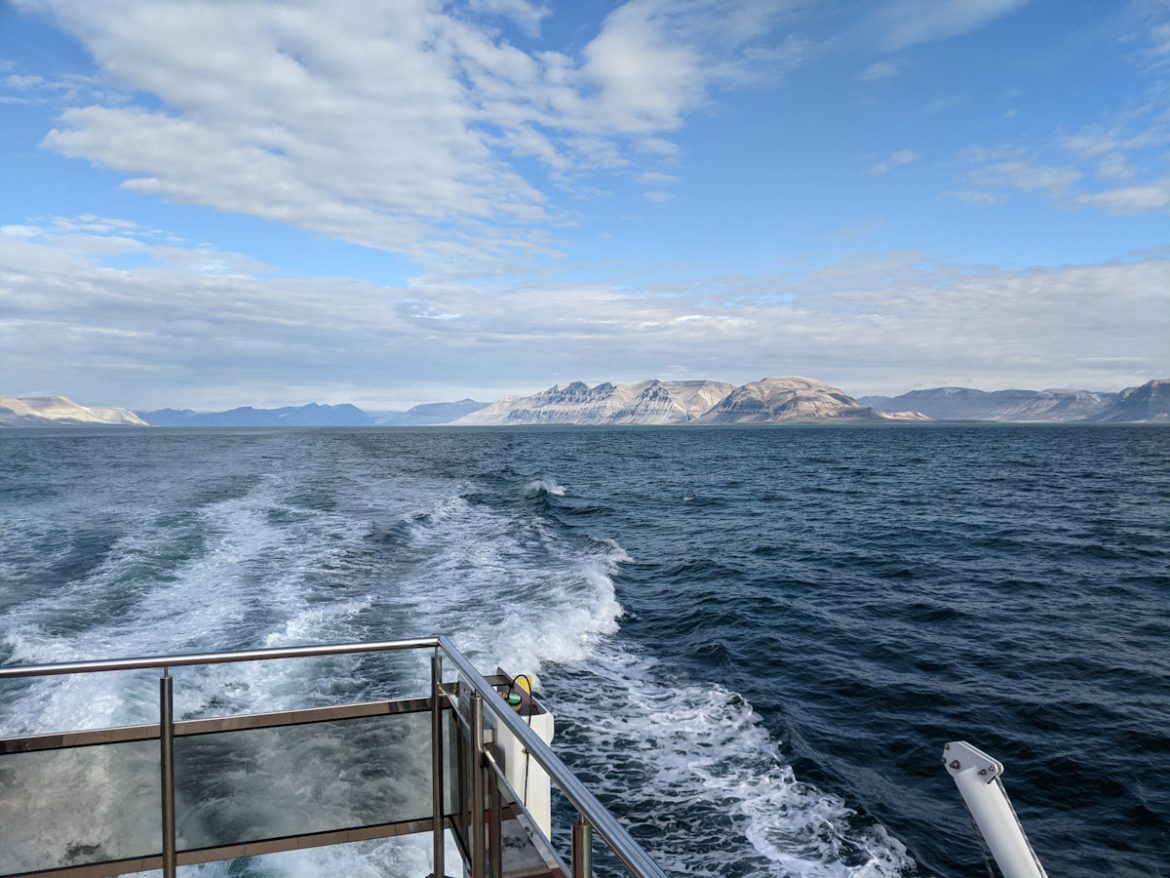 At the end of July and the beginning of August, we spent five days in Longyearbyen, the northernmost town in the world on the island of Svalbard. Hundreds of beluga whales swam around our catamaran, and we watched a polar bear mother with her two cubs on the edge of a glacier. A reindeer laid down in the tundra outside our window, and a fox darted past. We’d been traveling north of the Arctic Circle for some time now, but this was something else, a sort of no man’s land.

You can’t explore much of Svalbard on your own in case of polar bear encounters, which can be deadly. Adult males are the size of a small car and they can smell food from 20 miles away. When you see a polar bear sign, turn back towards town. Beyond these signposts, you have to carry flares and a rifle.

For those who aren’t boarding a multi-day North Pole expedition cruise, there are many day trip cruises to fjords and glaciers near Longyearbyen. We went on Hurtigruten’s fjord cruise aboard the MS Bard to Pyramiden. After fully researching all the tours offered, we decided that this hybrid catamaran was our best option for wildlife sightseeing. It’s a little more expensive than the other boats, but the lower deck is only a couple of feet above the water, and the motor is super quiet when running on electric so as not to scare wildlife away.

When we came upon hundreds of beluga whales in the fjord, the captain cut the engine and let us float for half an hour. One pod swam right up to the boat and dove under. It was incredible to hear their whale song.

We also spotted three polar bears on the ice – a mother and two cubs – and watched them through binoculars provided by the crew. Our wildlife sightings were extremely lucky, but I really do think being on the right boat with the right crew helped. The captain didn’t navigate too close to the glacier so as not to disturb the polar bear family. Our guide explained that the bears might run away and not come back if we scared them.

The only things this trip doesn’t do are take you to a walrus colony and dock at Pyramiden. A smaller boat goes to the walrus colonies, or you might end up there on a captain’s choice cruise. Pyramiden is an abandoned Russian mining town with the northernmost Lenin statue in the world.

We met other travelers who took a boat to Barentsburg, an inhabited Russian town, and said it was more beautiful than industrial Longyearbyen, so that might be worth seeing.

On one of our days in town, we walked to the Svalbard Global Seed Vault. We’d been told at our hotel that there would be a polar bear sign before we reached it. We kept looking for the sign but never saw it. A police car drove past and didn’t stop us, so we kept going until we reached the seed vault.

Most of it is buried deep in the mountain and you can’t go in, but it’s still fascinating to see the place that will save us in a doomsday event. The vault currently holds 50% of the world’s seed varieties and has capacity for more than 100%. There are 150,000 varieties of rice stored here (who knew there were so many!) and 200,000 varieties of wheat. Recently, the seed vault was called upon when Syria’s seed bank was destroyed by war.

The view from the hill was well worth the 5 kilometer, 1 hour trek from town.

This is a cozy church where everyone is welcome, with tea and cake after the Sunday service. I really liked the pastel colors, and there is a taxidermied polar bear cub inside. It was only two years old and charged some explorers. Because it was so young, it couldn’t be scared away, so it ended up being shot. After, it was preserved and given to the church.

This is a small museum jam-packed with taxidermied animals and educational exhibits. You can learn about melting sea ice, arctic wildlife, and the discovery and settlement of the island. Most people spend two hours here; I spent four. Aaron had to drag me out.

You can take a guided hike, sometimes combined with a RIB boat or kayak trip, to see the terrain with an experienced guide. The mountainsides don’t really have trails; they mostly involve scaling a scree covered slope, so you need hiking boots with good traction.

Flights to Svalbard from Norway can be quite affordable if you have some flexibility. Our flight from Bodo to Svalbard via Oslo on SAS cost $135 each and our return flight to Oslo on Norwegian was only $78 each.

After you land, you can take a taxi to town or a shuttle bus. We arrived in the middle of the night. There weren’t any taxis waiting at the airport, so we wound up on the bus. It waits for every passenger to collect their bags, then the driver goes from person to person to sell tickets. This took a long time, and we were the last to be dropped off. On the way back, the shuttle was much quicker because everyone already had their round-trip ticket.

If you arrive in the daytime, a taxi doesn’t cost much more, or if you have a relatively light backpack, you can walk. It only takes 45 minutes.

Most of the hotels and Airbnbs in Svalbard are $200 – $400 a night in the summer. We stayed at Funken Lodge, the most expensive hotel, but it was included in our Nordic Choice Unlimited summer pass. Everything has been renovated, and the common areas evoke cozy Scandinavian hygge. Breakfast was good (both chefs make an excellent omelette). Fresh fruit was a bit lacking, but it’s the most expensive thing in Svalbard. At 5pm there is a sweet treat (macarons or homemade brownie bites) with coffee and loose leaf tea.

You can also book Funken Lodge using Choice Hotels points. We met two travelers who only paid 76 euros a night by booking with points. If you don’t have Choice Hotels points, you can buy them or transfer from American Express Membership Rewards, as well as Citi ThankYou Rewards.

There’s a supermarket in town with a huge selection. We were amazed. I’m not sure why we brought so many peanuts and banana chips with us. They were all available for the same price.

Alcohol is particularly cheap compared to mainland Norway because Svalbard has lower taxes, so we got some cans of locally brewed beer to try. You can also find “the northernmost chocolate in the world” at the cafe next to the supermarket.

There are plenty of restaurants to choose from in Longyearbyen, and prices are lower than in mainland Norway because dining out is tax free – a pleasant surprise!