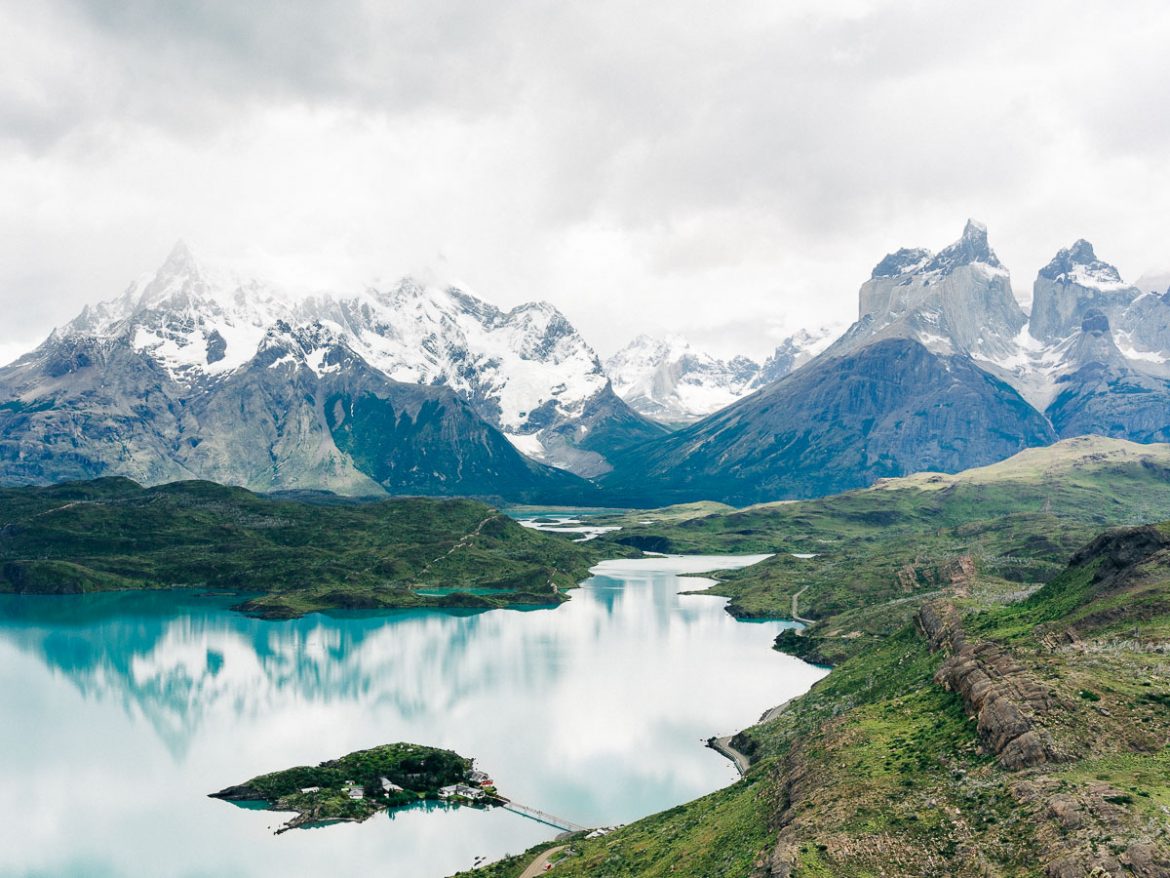 From December to March, the summer season in Patagonia, rental cars can start selling out as much as three months before their pick-up date; we booked five to six months ahead of time and suggest you do the same. If the rental cars aren’t prepaid, it doesn’t hurt to reserve with two different companies, just in case.

If you don’t want a rental car, you can also take a bus from Punta Arenas to Puerto Natales. It costs about $11 USD and runs frequently. You can check Bus Sur and Buses Fernández for exact prices and schedules. In the end, we calculated that renting a car didn’t save us any money over taking buses, even split between four people, but did provide much flexibility.

Instead of doing the W trek, we based ourselves in Puerto Natales for six days to give ourselves some rest days in between hikes, to celebrate Christmas with family, and in case of bad weather. We ended up with three sunny days and three cloudy, rainy ones, so in retrospect I’m glad we gave ourselves this amount of time.

Puerto Natales is a 1.5 to 2.5 hour drive from Torres del Paine, depending on where in the park you’re trying to reach. The roads inside the park can be slow going, as they’re mostly gravel. The “town” of Cerro Castillo is closer to the park, has some accommodations, and cuts down on driving time, but it doesn’t have nearly the amenities Puerto Natales has, like grocery stores, restaurants, and the bus terminal. We briefly considered staying in Cerro Castillo, but we were glad we didn’t once we saw it in real life. It’s more of a tiny outpost than a town.

We recommend this Airbnb in Puerto Natales – it’s brand new and close to the bus terminal.

The ticket to Torres del Paine is good for entries on three consecutive days. We bought our tickets at the Administration entrance instead of the Amarga entrance, which is much busier. The lines I later saw at Amarga would have been enough to defeat my hiking spirit completely if I hadn’t had my ticket in hand already. We ended up doing four hikes in the park – Mirador Condor, Salto Grande Waterfall to Mirador Cuernos (more of a flat walk), Sierra Masle above Laguna Azul, and Mirador Base Las Torres, a killer of a workout. We had wanted to do the Fauna hike as well, but learned that you can only do it with a certified guide now, possibly due to the presence of pumas along the trail.

For all the hikes except Mirador Base Las Torres, having our own car saved a lot of time because we could park near the trailhead for each hike. The visitor centers where the buses drop you off aren’t close to any of these trailheads, the one exception being Mirador Base Las Torres. For this hike, you can take a shuttle bus from the Amarga entrance to another visitor center from which the trail begins.

We also visited the Milodón Caves, an afterthought for many visitors to Torres del Paine but one that exceeded my expectations. The caves were enormous and the informational placards helpfully explained the origin of this part of Patagonia.

We didn’t go to Argentine Patagonia this time, but you can take a bus from Puerto Natales to El Calafate and then another bus to Perito Moreno Glacier. Chilean rental cars aren’t allowed to cross over into Argentina. The bus ride is quite long but many people do it this way.

Puerto Williams, the Southernmost City in the World

Next we returned the car to Punta Arenas and jumped on a DAP flight to Puerto Williams, a town on Navarino Island in the Beagle Channel, arriving on New Year’s Eve and spending the next three days there. The island is part of the Tierra del Fuego archipelago and might be the most remote place we’ve ever been.

Puerto Williams is the gateway to a five day hiking circuit through the Dientes de Navarino, a mountain range on the island offering some of the most isolated and roughest hiking in the world, drawing hikers from around the world seeking the true essence of wild Patagonia. We only did the first leg of the trek up to Cerro Bandera, marked by the flag of Chile. From there you can see Tierra del Fuego on the Argentina side, and even Ushuaia far in the distance. This hike is steep but can be done in a half day.

We recommend Hotel Fio Fio, which is right next to the town’s anthropological museum, and kayaking in the Beagle Channel with Explora Navarino.

The flight back to Punta Arenas was one of the most scenic flights I’ve ever taken. The flight to Puerto Williams had been foggy, but on the way back, the sky cleared, revealing a stunning white landscape below.

Punta Arenas itself is, quite honestly, a dump of a city, not worth staying in at all if not for Magdalena Island, an uninhabited island which is home to a colony of Magellanic penguins. A ferry leaves from Tres Puentes in Punta Arenas twice daily to take visitors to the island for an hour to see the penguins up close. You only need one day for this excursion, but again we built in an extra day, as sometimes the ferry won’t operate if the weather is bad.

How Much Time Do You Need?

To do this full itinerary, you need at least nine days – three full days in Torres del Paine, two full days in Puerto Williams, and one full day in Punta Arenas, plus travel days.