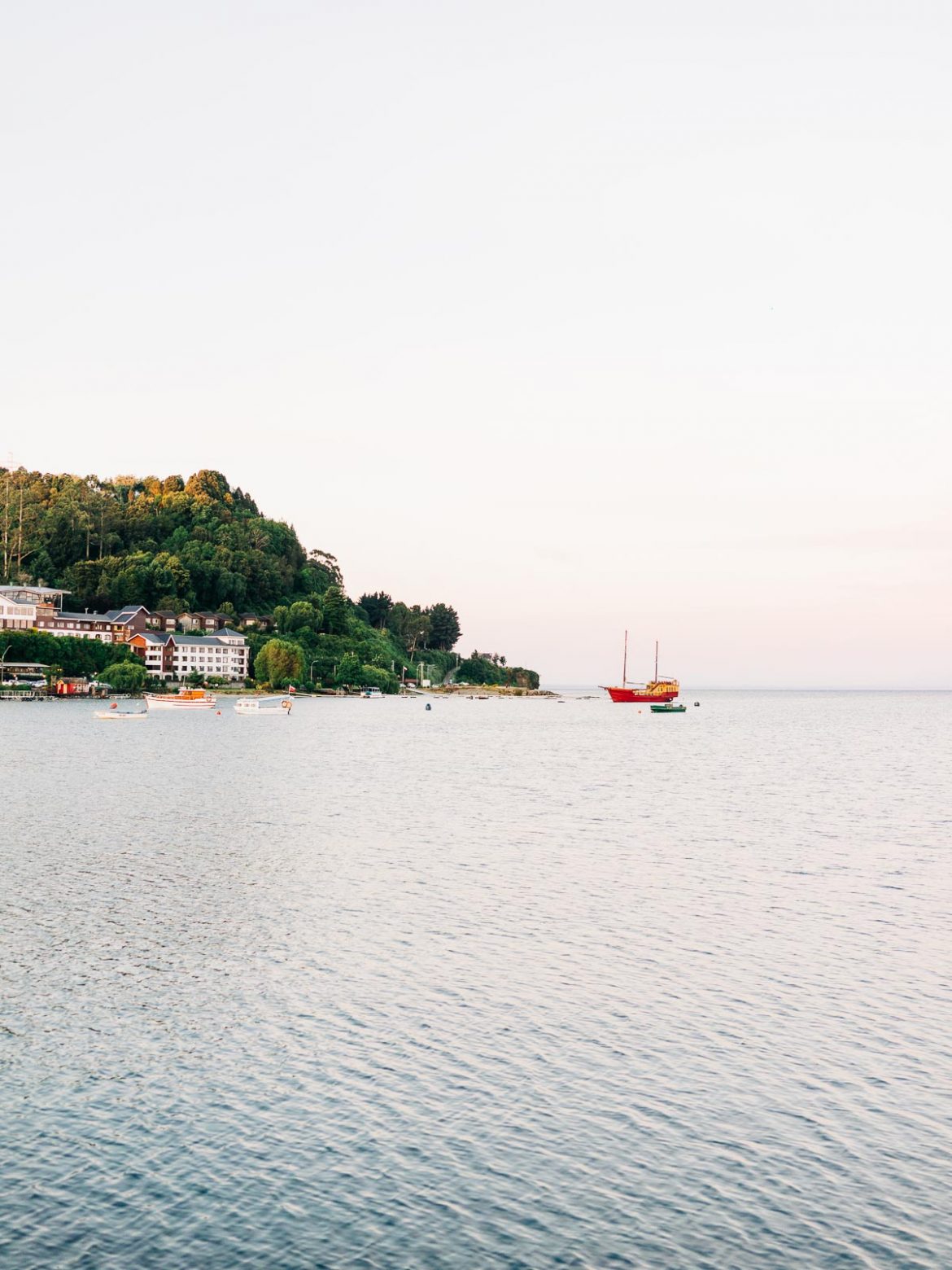 We spent November and December in Araucanía and Los Lagos, a land of volcanoes, glacial lakes, German settlements of old, and millenary araucaria trees, a uniquely shaped conifer that is the country’s beloved national tree.

This region can be more expensive than the Santiago metropolitan area, but it’s far more tranquil. Almost every day we were treated to the beauty of snow-capped volcanoes. Hiking and kayaking are popular in the summer along with skiing in the winter. It appeals to anyone wanting a small town feel close to nature. It’s also safe, something not to be taken for granted in South America.

We saw many domestic tourists and Germans, but few English-speaking ones, so most business is conducted in Spanish. Tap water is safe to drink and actually tastes good. A network of bus routes links the towns and is on Google maps.

The weather can often be rainy or cloudy, with moderate temperatures compared to Santiago’s summer oven and Patagonia’s wild fluctuations. Sunny days were extremely pleasant.

The only downside is it’s still in Chile, which means the food is bad, cleanliness standards are low, and hospitality is a relatively new concept. We were able to find a few good exceptions though, which we’ll share with you.

Here’s how we did our trip, with some of our better finds.

We started in Araucanía, home to the Mapuche, the only South American indigenous group the Spanish could not conquer. After flying into Temuco from Santiago, we picked up a rental car to drive to Conguillío National Park for a three night stay in a cabin in the woods, complete with a wood burning stove. The national park is home to the Llaima volcano, which just erupted in 2009 and created a huge lava field you can view from the Mirador.

This was the most remote and off the grid place we visited in the lake district. The nearest town is Curacautín, where we picked up groceries before heading down the gravel road to Llaima Camp, a collection of wood cabins newly built by a photographer couple from Santiago.

The government is slowly but steadily laying down more asphalt, so the roads will improve in the future. The road inside Conguillío National Park is rough, especially in the spring when it’s still muddy from snowmelt. In the winter you definitely need a 4×4. We made do with a standard sedan, but left it parked and walked the rest of the way once we got deeper into the park. Views of the Llaima volcano and the Sierra Nevada volcano range were well worth the trek.

Next we returned the rental car to Temuco Airport and took the bus to Pucón, a popular resort town on the banks of Villarrica Lake. The airport runs a shuttle service to Pucón, but only when planes land. If you don’t want to wait, you can take an Uber to Freire, where buses to Pucón come every 30 minutes. It’s also cheaper to do it this way.

We spent a week in Pucón at our favorite Airbnb in the lake district, walking along the beachfront and viewing the Villarica volcano from La Poza. We tried empanadas at Pura Pavadas, a popular place serving them made-to-order, including vegetarian ones filled with actual vegetables, not just cheese. The town is filled with fruit and vegetable stands, but also has supermarkets like Unimarc, Lider, and Eltit. During Chilean summer, you have to try the blueberries, peaches, and nectarines.

For the adventurous, activities just outside Pucón include climbing the Villarica volcano, hiking in Santuario El Cañi with its many araucaria trees, and hiking in Huerquehue National Park, which is accessible by bus from Pucón.

From Pucón we took the JAC bus to Puerto Varas on the shores of Lake Llanquihue. Known as the city of roses for its abundance of rose bushes all over town, it’s more touristed than Pucón and therefore a little more expensive.

The streets are lined with gingerbread shingled wooden houses, a vestige of its German past. On a clear day, you can see three volcanoes across the lake, including Osorno, with its perfect snow-capped conical shape. It has been called the Fuji of South America. Having been to both, Mount Fuji is quite a bit more imposing, but nonetheless, sunset views in Puerto Varas never fail to delight.

It does rain a lot, the climate similar to Seattle or London, so it’s worth spending more than just a few days here to account for the weather. It rained so much during our first week in Puerto Varas that we didn’t even know which direction to look for the volcano in.

Puerto Varas has a thriving small business scene and artisanal markets. Our favorite cafe was Emporio Rengifo, where locals line up for the daily lunch special. It also has the best homemade ice cream in town. Parque Philippi offers walking trails and Museo Pablo Fierro is a quirky local attraction. Both are free to visit.

From Puerto Varas we took day trips to Frutillar, Chiloé Island, Petrohué Waterfalls, and Osorno volcano. We went to Frutillar independently; you can find bus routes from Puerto Varas on Google maps. For the other places we went with Turistour. We booked on Orbitz with Planet Andina, which sells Turistour tours for less than the local Turistour office.

We don’t recommend the Chiloé tour because most of the day is spent on a small cramped bus and the stops are none too interesting. The stilt houses of the Chiloé archipelago were destroyed and washed away by the earthquake and tsunami of 1960. The ones you see now are replicas rebuilt by restaurants and hotels capitalizing on the fame of the original ones.

Petrohué Waterfalls and Osorno volcano are bundled as a full day tour, and this one we recommend, with a word of caution – the tour company encourages you to pay for a lot of extras at each stop, but these additional activities are not really necessary. For example, most people hike the trail up Osorno volcano instead of paying for the chair lift; the view is better on foot.

We also went to Puerto Montt for a day and can definitively say it’s skippable. You will need to fly out of Puerto Montt as the airport is there, but don’t make the mistake of staying there. Puerto Varas is only 30 minutes away with buses running all the time between the two, or you can take an Uber.

That wraps up our lake district itinerary. We spent over a month in the region; at a minimum you would need 9 days to cover it all. It’s also possible to visit only Conguillío National Park from Temuco or Puerto Varas from Puerto Montt. Pucón is a little trickier as it’s only accessible by car or bus, with no nearby airport. While I personally loved Pucón, it’s not essential to a lake district itinerary if you’re short on time.

January and February afford the best summer weather to visit, but to avoid the busy season, December offers pleasant temperatures and festive Christmas markets as well.