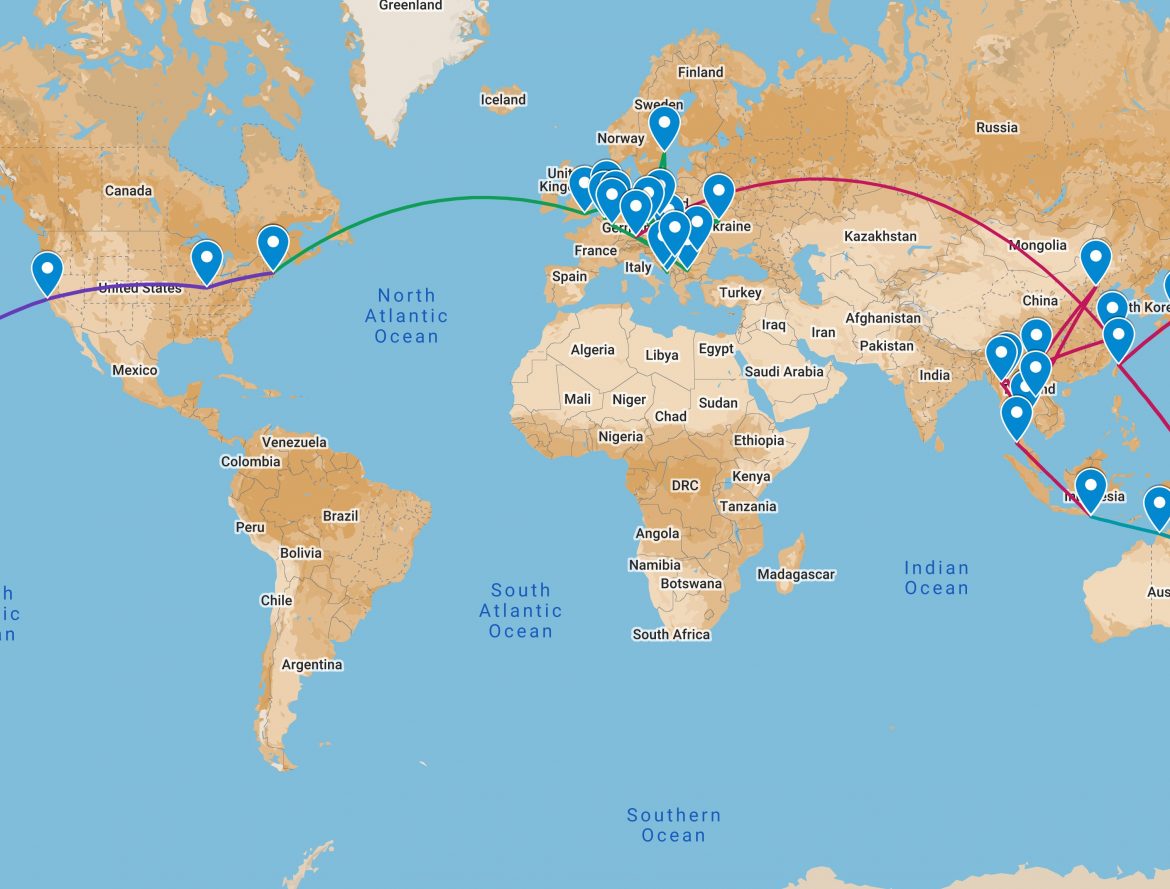 Our first year of full-time travel took us from Boston to Europe, Asia, Australia, New Zealand, and Hawaii. We spent the summer in Europe, winter in Southeast Asia, summer in the Southern Hemisphere, and cherry blossom season in Japan. It was almost always warm (this was on purpose) so we could pack really light. We planned our route well in advance, sometimes by as much as one year, and thoroughly researched the best flight and train connections.

Here is our route!

If you’re starting from the East Coast of the US, some of the cheapest flights to Europe are to London, Barcelona, Madrid, and Milan. On this trip we flew from Boston to London for $70 per person. We booked 6 months in advance!

If you’re starting from the West Coast, you can do our itinerary in reverse by flying to Honolulu, then Osaka. It often costs the same as flying straight to Japan, so you get a free stopover in Hawaii this way.

London was our first stop. Nearly all the museums are free, so don’t miss the British Museum and the Tate Modern.

From London we flew to Amsterdam. The Anne Frank Museum was the highlight of our visit, and the sun stays out til 10 pm so you can visit the windmills in the evening when it’s quieter.

The Thalys train connects Amsterdam to Brussels, home to one of Europe’s most beautiful old town squares.

From Brussels we picked up a rental car to drive to Germany, stopping first in Cologne to see the cathedral, then onwards to Augustusburg Palace, Burg Eltz, and the Moselle River Valley – Germany’s wine country. This was a highlight of our trip. The river winds through picturesque small towns and hillside Riesling vineyards.

On our way back to Brussels to return the car, we stopped in Luxembourg, one of Europe’s smallest and wealthiest countries. It’s also a great place to fill up on gas, because it’s cheaper here than in Germany or Brussels.

Next we flew to Sofia, Bulgaria, a big discount airline hub with flights spoking out to most major European cities. We only paid $16 each to fly from Brussels to Sofia. An hour outside of Sofia, you can visit the Rila Monastery and hike to Rila Seven Lakes in the Bulgarian alps.

Bulgarian Rail connects Sofia to Bucharest, Romania, where we picked up a car to drive to Brasov in the heart of Transylvania, home to Bran castle, also known as Dracula’s castle. Brasov is lovely, but Bucharest can be skipped.

We then took Romanian Rail to Belgrade, Serbia, an up and coming digital nomad destination on the banks of the Danube. An hour north of Belgrade, we also visited Novi Sad, a university town with Hungarian style architecture and great food, including many plant-based options.

From Belgrade we took Serbian Rail to Budapest, the home of Wizz Air, another discount airline hub. We flew Wizz to Kiev, Ukraine and Wroclaw, Poland. The ballet is not to be missed in Kiev, and Wroclaw has a charming downtown.

Polish Rail connects to Prague, which was way too touristy. We had to wake up at the crack of dawn just to see the astronomical clock without mobs of people blocking our view. But we stayed in a quiet neighborhood outside of the center that was quite pleasant.

From Prague we flew to Stockholm – clean, polite, English-speaking, and expensive, with delicious cinnamon and cardamom buns. It actually reminded us of Boston.

Next we took a flight to Montenegro. The Scandinavian countries are surprisingly well connected to the Balkans. We landed in Podgorica and headed straight to the stunning Bay of Kotor.

While in Montenegro, we rented a car and drove to Mostar, Bosnia and Herzegovina. Mostar opened our eyes to the complex history of the Balkans, and we also discovered the deliciousness of Bosnian home cooking.

After Bosnia, we took Montenegro Rail back to Belgrade to catch our flight to Shanghai, with a layover in Doha. Near Shanghai is my hometown of Hangzhou, one of the most popular domestic tourist destinations in China, but little known to foreigners.

From Hangzhou we took the high speed train to Beijing and spent five days there before flying to Kunming, a city in the southwest of China. Kunming is home to many of China’s ethnic minorities and borders Southeast Asia. You can fly to Bangkok from here, or for an interesting overland route, take the train to Sapa, Vietnam.

We opted for Bangkok. I really enjoyed the street food and abundance of fresh fruits in December, but not the loud traffic, especially from motorbikes.

While we were in Bangkok, we took a side trip to Myanmar, flying into Mandalay, then cruising down the Irawaddy River to the ancient city of Bagan.

After Bangkok, we flew to Phuket, where we took a boat trip to a Muslim floating village that was incredibly unique. It had a floating soccer field!

Since we stayed in Thailand for more than 30 days, we also did a visa run to Laos. First we flew to Udon Thani, and then we crossed the border into Vientiane, Laos on a bus. In Vientiane, we visited the COPE centre to learn about the history of cluster bombs in Laos.

Phuket is a good place to catch a flight to Bali. We’re not really beachgoers, so we spent most of our time in Ubud. The island is full of diverse terrain ranging from coastal to jungle, with temples, monkeys, rice terraces, and waterfalls, but the roads are rough, and you should be prepared for spiders and lizards in your villa.

From Bali we flew to Darwin in Australia’s Northern Territory, home to crocodiles, but it was the rainy season so the crocodile viewing sites closed just before we got there due to floods. We saw some stunning waterfalls though. Next we flew to Cairns, where we took a boat trip to snorkel in the Great Barrier Reef. Unfortunately the reef is dying so there wasn’t much marine life left to see. We flew on to Melbourne and rented a car to drive the Great Ocean Road. Our last stop was Sydney and its famous opera house. We really loved Australia – it was so clean and the people were so friendly.

After Australia, we flew to Christchurch, New Zealand. On the South Island, we drove to Queenstown, Te Anau, Milford Sound, Wanaka, and Omarama, before returning to Christchurch and flying to Auckland on the North Island. We picked up another car and drove to Coromandel, Whakamarama, Taupo, and Tongariro Crossing. We spent a lot of time just driving in New Zealand!

After returning the car to Auckland, we flew to Taipei, Taiwan. We were pleasantly surprised to find such a livable city – close to nature, with lots of vegetarian food and some of the best night markets in Asia.

Next we flew to Osaka, Japan to see the cherry blossoms in April. We took several day trips to Kyoto, Nara, and Koyasan before flying to Tokyo. We spent 10 days in Tokyo and also stayed a few nights in Kawaguchiko to see Mount Fuji.

After a month and a half in Japan, we started our return journey home, flying from Osaka to Honolulu, Hawaii, where we stayed a few nights before flying to San Francisco and then Boston, concluding a year on the road that took us through four continents and twenty-five countries.

We barely scratched the surface in many places, but this was meant to be a broad survey so that we could figure out which places we wanted to return to, which we have since done!

Nice Itinerary. A good follow up would be about the ones you returned to. Thanks and happy travels. I’m right behind ya!