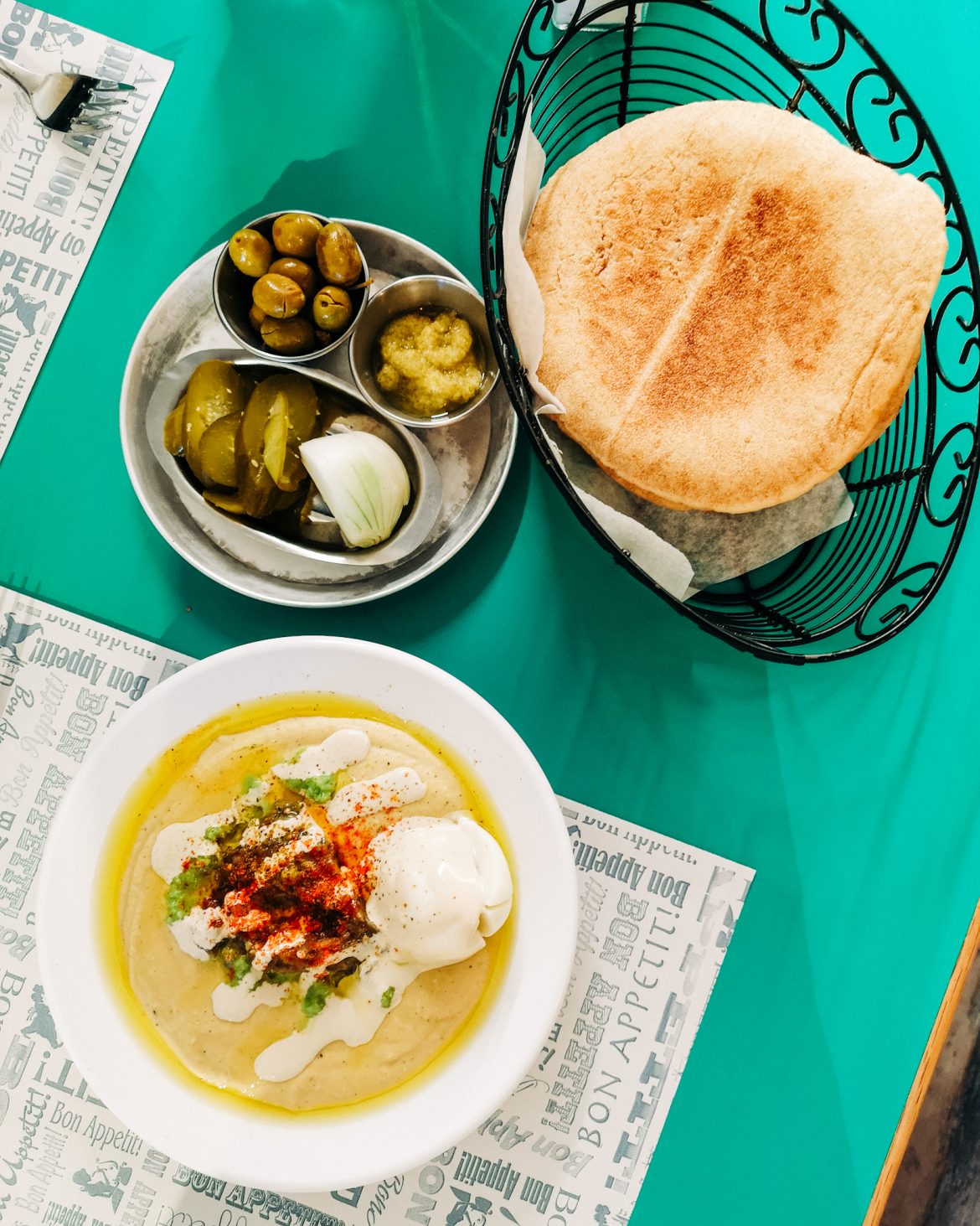 In the 10 days we spent in Israel, we ate hummus 8 times to find the best one. Hummus wasn’t always a staple in Israel. It became popular after the 1950s, but in recent years has become more like a national obsession.

Here are a few things you should know about hummus in this country. It’s typically served with a stack of pitas, onions for scooping (this was new to us), and often pickles and olives. Traditionally it’s an Arab food and is served cold. The notion that it should be served warm, as it is in Jewish establishments, is apparently a European Jewish influence. Israeli pita tends to be white and fluffy, but many places offer whole wheat pita if you ask.

Traditional hummus toppings include tahini, ful (a lemony stew of fava beans), whole chickpeas, and olive oil. Other popular toppings include sabich (fried eggplant) and shakshuka (an egg cooked in tomato sauce). Masabacha (or mesabaha) is a variation of hummus where the chickpeas are smashed or left whole and mixed with tahini instead of blended into a puree. I personally really like masabacha and will give you a recommendation for that in addition to our top hummus picks.

Further reading: Who invented hummus? and Why are Israeli Jews obsessed with Hummus?

First we searched for the highest rated hummus in Eilat, Jerusalem, and Tel Aviv on Google Maps, then rated each using our own scorecard, which had one section for the hummus itself and another section for “everything else,” with the hummus weighted twice as heavily as “everything else.” For the hummus, we rated texture, flavor, and quality of ingredients. We looked for creamy, nutty hummus with a good balance of salt and lemon, the clear presence of tahini (the most expensive ingredient), and good olive oil. Under “everything else,” we rated ambiance (space, service, location), toppings (variety, quality, ingenuity), bread (fresh, chewy, hot), and value (price to quantity).

In Jerusalem, go to Hummus Eliyahu and order a large complete.

In Tel Aviv, go to Abu Hassan and order a full masabacha.

In Eilat, go to Humusuf Eilat and order a shakshuka hummus.

We had the shakshuka hummus as well as a mixed bowl with a big dollop of hummus on top. As soon as I tasted a spoonful of the hummus on the mixed bowl, I knew it was the best I’d ever had. It’s thick but melts in your mouth and you can taste the nuttiness of the tahini. We rated it a 10. The shakshuka was also delicious, and because it’s kind of a premium topping, 28 shekels for the combo was a good deal. Shakshuka hummus is normally in the ballpark of 36 shekels elsewhere. The pita was also the best we had in Israel, hot and chewy with good flavor, and the falafel balls were fresh out of the fryer, crispy yet delicate inside. The only thing that’s keeping Humusuf Eilat from the top is its location, in an industrial part of town a bit far from the waterfront. The cafe is cute inside though. If you’re in Eilat, it’s worth the trek.

This was the only restaurant that gave a free refill even if you were sharing one hummus. We didn’t even ask for one, they just brought it as a matter of course. It was the only time we left totally stuffed. We could have skipped the falafel, which were a bit dense and dry, if we had known about the refill. We rated the hummus itself an 8.3. The included toppings were quite interesting. We were recommended half green, half red. The green sauce is parsley blended with olive oil, and the red sauce is tomato and garlic. We liked both and would recommend you get the same. The pitas were a little too soft and fluffy for our taste. We should have asked for whole wheat. However, the service was the best (the girls there were so nice!). They even play great 90s American music. It’s also in a good location next to the Mahane Yehude Market in Jerusalem, so if you’re nearby and hungry, it’s a solid choice. You will definitely enjoy the overall experience.

Lina is listed by many online sources as one of the best hummus places in Jerusalem, and we were lured in by the pine nuts that top their hummus, but everything was too cold – the hummus, the pita, and the service. We rated the hummus itself an 8. The pita was actually pretty flavorful but it should have been warm! The space was a little dingy and the service was the opposite of attentive. The portion is not big either. We left still hungry and cold.

Really unique sweet hummus. The sweetness is light and comes from date honey added to the hummus. We really liked the flavor and rated the hummus itself a 9.3. However, the toppings were extremely meager and nothing special. The pita came hot, which was nice, but it tasted bland. The location is great inside the Old City, the space is cute, and the service was fine, but we just couldn’t justify the high price for not a lot of food.

We only went to Ben-Sira because our waiter at Hummus Haviv recommended it. I so regret it! The hummus was terrible. It was runny and flavorless, which means extra water or oil was added. We rated it a 4.6 out of 10, far lower than any of the others. It was also extremely plain for the price, topped only with extra chickpeas, not even a drizzle of tahini. The falafel were too greasy and salty, so they didn’t add much to the value. The pita was also bad, and neither the pita nor the hummus were served warm. The only tasty thing was the salad we ordered, which had a nice spice mix sprinkled on top, but at 17 shekels it was priced too high for a small bowl. You can get great falafel with an unlimited salad bar just a few blocks away for 17 shekels. Our credit card was also overcharged. The atmosphere inside would have been okay had it not been for the terrible music – a techno song on repeat in which someone kept saying “HUMMUS” in a booming robot voice.

Comes with 2 warm pitas, olives, pickles, and spicy green sauce. Free coffee and surprise cookies at the end. Free refill if you order a large hummus per person. 30 shekels for a large “complete” which comes with ful, tahini, and an egg.

Delicious nutty hummus with flavorful toppings. This was our favorite in Jerusalem. Even though it’s a chain, it felt like a small intimate cafe inside with friendly service and an open kitchen where I could watch the hummus being made in small batches. The hummus itself is warm and rich with tahini. We rated it a 9.7. It’s also a great value because an egg is included in the “complete,” which is usually an extra 3 or 4 shekels at other places. The ful topping was really tasty, and the pita was warm and chewy. For 30 shekels we both left full, plus we got a small tub of complimentary cookies at the end. Definitely get their “complete” – many reviews recommend this! I would love to go back and try their sabich hummus (with eggplant) and their shakshuka hummus as well.

When we got to Tel Aviv, we asked our Airbnb host what his favorite hummus was, and he said Hummus Eliyahu. Even the waiter at Schlomo & Doron said Eliyahu is good. So we feel pretty confident recommending both the Jerusalem and Tel Aviv locations to you.

Beautiful presentation with herbs and spices, but the hummus was so salty even Aaron, who likes salty food, said, “You know it’s not a good sign when I start chugging water.” At least they had free chilled water! We suspect the food is so salty because this restaurant also sells beer, and salty food encourages the purchase of beer. We rated the hummus an 8 – good thick texture but oversalted. The mesabaha was dissapointing, as it was just chickpeas, not blended through with tahini at all, as it should be. The ful was too sour and there was too much of it. Even though it looks like a lot of hummus on the plate, it’s really just around the rim. Only a third of our bowl actually contained hummus, so in that sense the “threesome” is a poor value, and there were no pickles or olives. The service was good, our waiter explained all the different menu items as well as their special toppings, like Mexican and a variation on shakshuka, but we’re afraid these might be oversalted too.

Comes with 4 pitas, onions, and a bowl of green pickle juice (not sure how else to describe it). 20 shekels for a full portion, half masabacha, half hummus.

It was hard to rate Abu Hassan because their masabacha was such a standout (on the left in the picture above). It’s warm crushed chickpeas swimming in tahini and lightly tangy. I would give Abu Hassan’s masabacha 10 out of 10. No wonder it’s recommended on the menu. The hummus has a good texture, thick and creamy, but with a bit too much lemon juice, drizzled with cheap oil, and served cold, like refrigerator cold. Aaron liked it though, so we rated the hummus a 9. There aren’t many topping choices, but we rather like the simple and traditional menu. The pita is average but plentiful – the only place we went that gave 4 pitas even for a shared bowl. Overall the value was impressive – really cheap prices for large portions.

We had read that Abu Hassan gets very crowded and the service is brusque, but we would describe it more as brisk. We went to the newest location at Shivtei Israel St 14 at 3pm and it wasn’t crowded at all. There were even people chilling there with their laptops. The interior was modern, clean, and spacious, the hummus came in practically 1 second, and Aaron had a nice chat with Abu Hassan’s daughter, who explained that they have 3 locations now and this was the newest.

Don’t Judge a Book by its Cover

As you can see, some of the hummus looks really good but ended up with low scores. Never judge hummus by the way it looks!

Expensive doesn’t equal good either. Good hummus and bad hummus are the same price. Sometimes the good hummus is even cheaper.