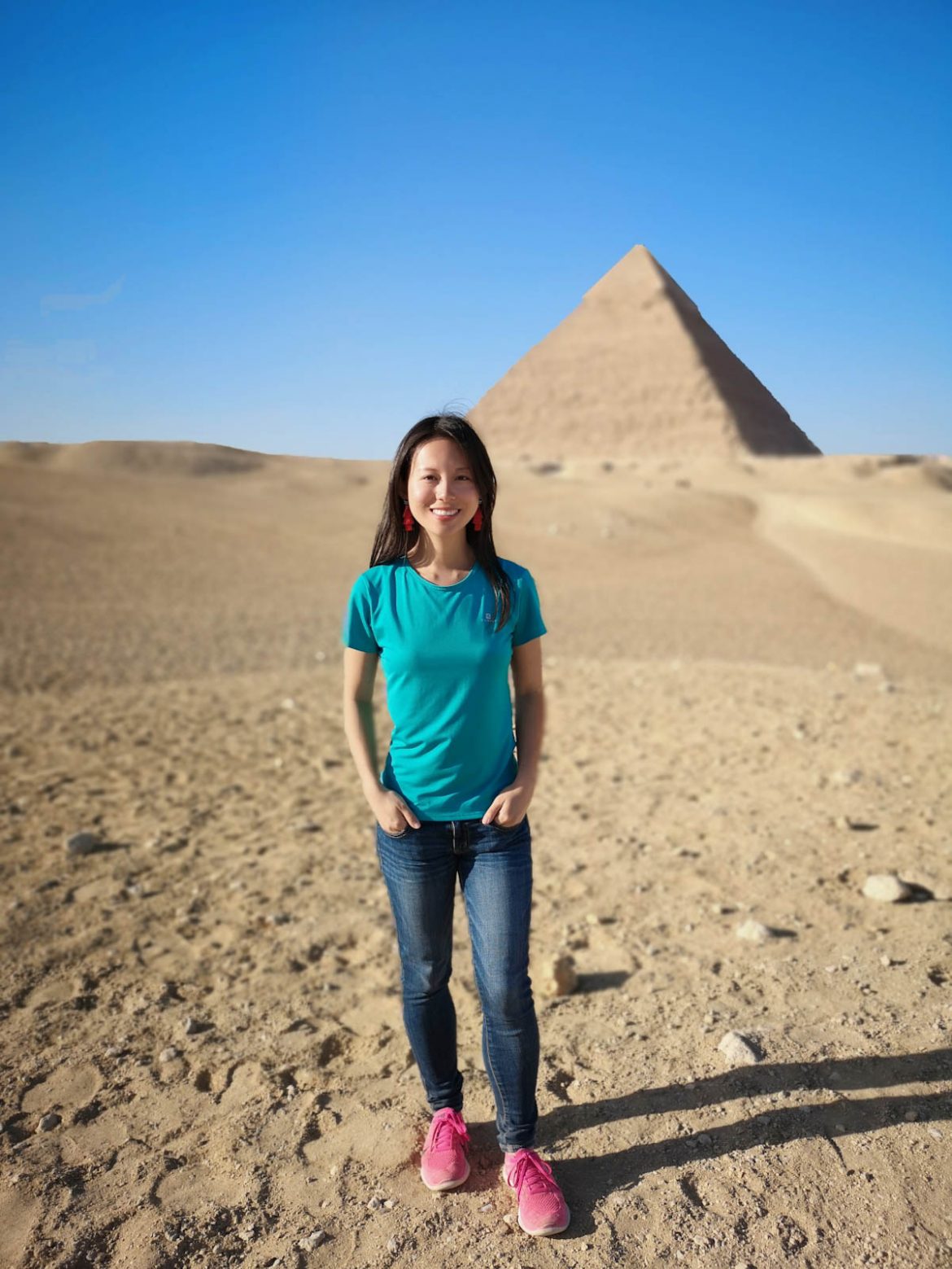 We traveled to Egypt for 10 days from late December 2018 to early January 2019, spending two days in Cairo, four in Luxor, two in Aswan, and our last two in Giza. Our style of travel, while not completely immersed in the local experience, is not sheltered from it either.

We stay in Airbnbs, take trains, eat local food, and for the most part don’t join tours, preferring to do our own research and visit places independently.

No matter your style though, the things I highlight here will be touchpoints for everyone traveling in Egypt.

A few days after we got to Egypt at the end of December, a roadside bomb exploded in Giza on the main road to the pyramids, blowing up a tour bus heading to the sound and light show that night. Three Vietnamese tourists and a tour guide were killed. The President’s response? “It happens.” A day later, he killed 40 people before a full investigation. Supposedly suspected terrorists, but if you look closely at the footage, at least some were already in prison. The government likely used the attack as an excuse to kill political prisoners.

When we visited Giza a week later, we didn’t notice any, never mind additional, security measures. The ticket office and entrance to the pyramids was as chaotic as could be.

The following May, another roadside explosion hit a tourist bus in Giza. A lot of people on social media say it’s safe to go to Egypt because nothing bad happened to them. That’s such a small sample size. Two explosions have now taken place in the last 6 months. Both targeted tourist buses.

About a week after the December attack, 60 Minutes aired an interview with Egypt’s President and military dictator, Abdel Fattah al-Sisi. In the interview, the 60 Minutes host is grilling Sisi about the violent repression in Egypt since he took power. Sisi denies everything, but he’s visibly sweating. Immediately after, Egyptian officials formally requested 60 Minutes not air the interview, an unprecedented move.

All over the world the standard of living is improving, but Egypt is crumbling. At one time the buildings in Cairo were grand and beautiful, but now they’re caked in dust, the insides in total disrepair.

On our long train ride from Cairo to Luxor, we met an Egyptian civil engineer. Aaron talked with him for four hours. He works 6 days a week. His father is a lawyer and his mother is a teacher. Everyone works, he says, but nobody ever gets ahead. On our return train from Aswan to Cairo, we met a university professor on his way to Cairo to take an English proficiency exam. He’s applying to a Ph.D. program in Canada, intent on leaving Egypt, whatever it takes. He told us about how he spent 3 months in Shanghai, and how nice it was there. We told him the train in India is better than the train we were on. “The train in India is better?” He was so surprised. Yes, much better. There was no ac and people kept smoking in our car. Below are first class seats.

All of this is due to bad governance. No wonder Arab spring took root here. And for a moment it was successful, but now, Egypt has gone back to being a total police state. There’s no freedom of speech. We went to Tarir Square but nobody speaks about the protests that happened here anymore. Journalists have been jailed for being journalists. Watch Bassem Youssef’s documentary, Tickling Giants, an eye-opening exposé on the last ten years.

Egypt exhausted us more than any other place we’ve been to. The infrastructure is a total mess and corruption is rampant. In fact, in 2018 Egypt’s former anti-corruption chief was jailed for five years after a military court convicted him of insulting the armed forces.

The cheating and aggressive pushiness in the tourist industry is the worst we’ve ever experienced, with people following you so closely it feels physically threatening. We had to stand firm when people disguised as official ticket collectors told us our train tickets weren’t valid, or hold on tight to our tickets at Giza when people tried to snatch them from us in order to sell them back to us.

Armed police always turned a blind eye because they get a kickback from the scam artists, or worse, they facilitate by questioning you on what country you’re from. They ask this to determine if you’re holding strong currency, like dollars or euros. One time Aaron answered Turkey (the lira had just crashed) and everyone immediately lost interest.

Waiters would hand us change in one hand but keep half of it hidden in the other hand, even in nice restaurants. We had to count everything and be ever vigilant. It was mentally draining not to be able to trust anyone.

We didn’t experience any kind of warm hospitality to write home about (except for a fellow train passenger who offered me his bottle of water after he drank from it – comically confusing but kind). Most people treated us as if we were only walking wallets. It’s common for Airbnb hosts to double as tour guides, so they can be unhelpful when asked how to get somewhere on your own.

The accommodations themselves were trying to be nice, but none of them lived up to their favorable reviews. We couldn’t figure out why the reviews were so good. Were they meant to help out the host?

One of our Airbnbs had a small round window with no glass pane. It was just a hole in the wall. Egypt is cold in the winter, so in January our bedroom was freezing at night. Another Airbnb put us in a room with a dirty shared bathroom instead of the private one we booked, but what could we do at the last minute? In Luxor, the heating fan was broken in half, but instead of providing an intact one, our Airbnb host propped it up on an ironing board – a total fire hazard.

Our hotel in Cairo was the worst though. When we booked, it had a 4.8 star review on Google. Even now, it has a 4.4 star review, but it’s the worst place we’ve ever stayed. It was supposed to be newly renovated, but the men at reception were smoking and the linens hadn’t been changed. We figured out that they were using fake reviews.

The only accommodation we liked was our hotel in Giza. We were pleasantly surprised that reception was friendly, the rooms were clean, and the breakfast buffet was really good.

The archeological sites in Luxor were so reconstructed we really questioned how much of it was original. We walked all the way from downtown Luxor to the Valley of the Kings and Queens and saw men literally building more “ruins” along the way. Queen Hatshepsut’s Temple was just a modern concrete block.

At Karnak, locals had put up their own gates to certain parts of the temple, telling people they had to pay an extra fee to enter – a common scam. We just pushed their gates aside but it annoyed us nonetheless that the managers of the site allowed this to go on.

A shuttle driver at Hepshupset’s temple tossed an empty plastic bottle out of his cart (which Aaron picked up and threw back into the driver’s lap). Littering was a big problem everywhere except at Abu Simbel, which was better managed than the other sites.

We’ve never seen a national museum in such shambles. It’s a shame because it holds such treasures, but so much of it is covered in dust with little care or curation. It looked more like a garage sale than a museum.

We read that tour guides had removed many of the labels in the museum to force tourists to hire them. Indeed, there were very few informational placards or object labels. We would have been lost had we not watched several documentaries on ancient Egyptian history and downloaded an audio guide created by izi.travel.

Good fruits and vegetables were hard to come by. Egypt may not be able to import agricultural products from other countries, so they’re limited to what they can grow at home. We ate a lot of beans and whole wheat pitas.

We tried the famous Koshary Abou Tarek in Cairo, but found that they served up lukewarm pasta with flavorless rice, chickpeas, lentils, canned tomato puree, and garlic juice. It’s Egypt’s favorite street food, but it seemed like a legacy from an era of rations.

On the train, vendors walk up and down the aisle selling hummus, which we were told was a watered down hummus drink, like a hummus smoothie. We were advised not to get it.

We only found one restaurant we liked – Nile View Restaurant in Luxor, which grew its own vegetables. We tried other places but were quickly disappointed, and ended up eating at Nile View every night for our entire stay. We also found some delicious date rollup cookies from a small, honest bakery in Luxor. And the pitas were always fresh and amazing, made out of whole wheat grown and milled right there, locally.

The markets always bustled with activity. We walked through newly planted fields and waved to curious farmers. We saw the sun rise over the Nile. Abu Simbel was incredible, and the Pyramids at Giza turned out to be a surprisingly fun, hassle-free day.

What Other Travelers Have to Say

Since our trip, we’ve spoken to a few other people who’ve been to Egypt. A family friend went on a weeklong luxury Nile River cruise shortly after us and paid about $4000 for it. That’s enough money to buy a nice tourist experience in almost any part of the world, but even then she didn’t like Egypt. She went for the history, but was shocked at how dirty and unkempt the sites were. Aaron’s parents, who went to Egypt in the 90s, described Giza as pyramids on one side and slums on the other. Today it’s more like pyramids on one side, Pizza Hut on the other. Another long term traveler backpacking through Africa said she would never go back to Egypt. But our friend in Austria loved it, so everyone has a different experience.

To Go or Not to Go

We understand Egypt’s pull. For many travelers, including us, it’s a necessary place to visit in one’s lifetime. But when we were there, we couldn’t wait to leave. For the sake of its people, I hope the situation in Egypt improves.

Some months after leaving Egypt, a new book about the country was published, and it happened to be by my favorite journalist, Peter Hessler. The Buried: An Archeology of the Egyptian Revolution is an incredibly timely read for anyone who hopes to understand Egypt, both past and present, rural and urban.