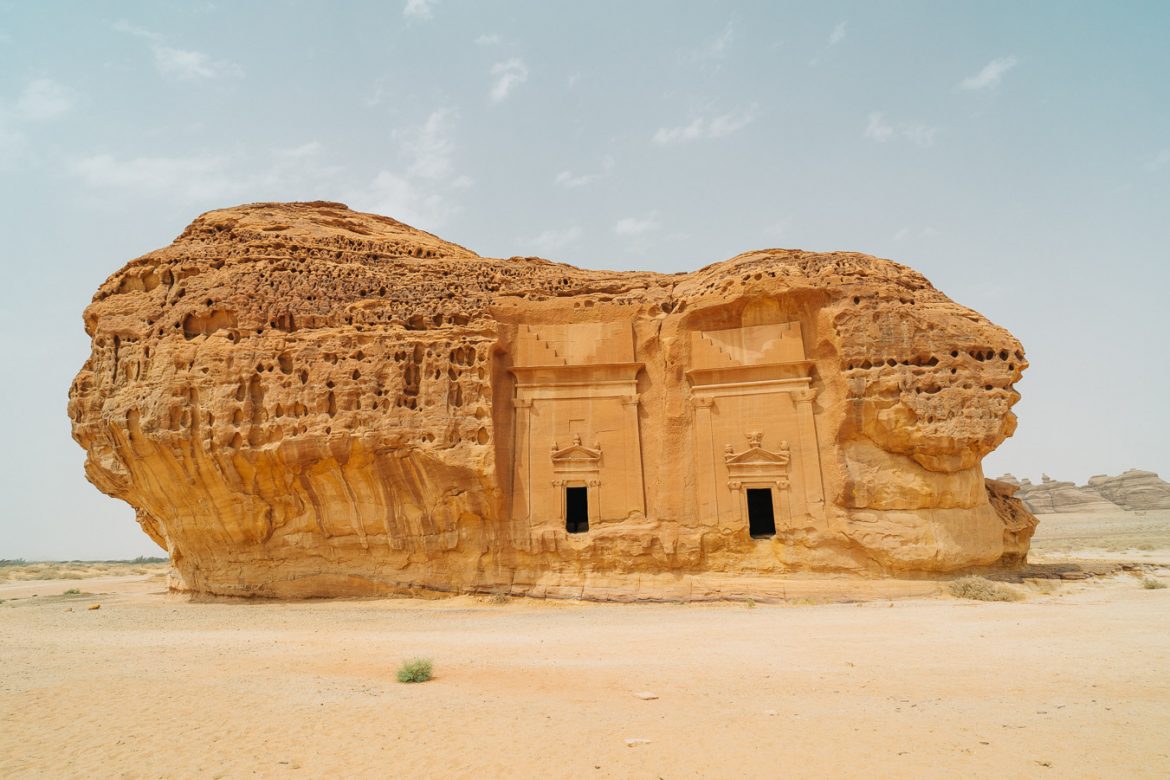 The sandstone tombs at Al Ula suddenly put Saudi Arabia on the travel map a few years ago, but getting there was a bit of a mystery because there’s so little information online. Most tourists who have posted about it so far seem to be on a guided tour. We wanted to do it on our own, so we had to wing it. It wasn’t without hiccups, but in the end it wasn’t so difficult, so we’re here to tell you everything you need to know.

First, you have to be comfortable driving in Saudi Arabia, both out of the city and into the desert. Saudis do not respect lanes, signals, or pretty much any rules of the road, so be prepared for that. Once you’re out of traffic and in the desert, it’s easier driving, but you are alone for long, long stretches.

To get into Saudi Arabia, you need an eVisa. Applying is easy enough but paying for it is another story. All of our credit cards were declined except for our Amex. This happened again and again – Saudi websites are not yet equipped to take foreign credit cards.

You also need an International Driving Permit, required by every car rental shop. If you’re American, you can get one from AAA.

Once you’re in the country, you can fly straight to Al Ula, or you can fly to Madinah then drive to Al Ula. As it was the end of March, we figured it would be a once in a lifetime opportunity to see Madinah on the eve of Ramadan. It’s the second holiest city in Islam and the “Muslims only” signs on the highway to Madinah were recently removed.

We flew in from Jeddah on Saudia, the national carrier, and rented a car from Budget. If we did it over, we would rent from Yelo instead because most Saudis were renting from them. Budget turned out to be pretty scammy, double charging us more than 30 days after we returned the car. They also gave us the car on empty.

After we picked up the car, we drove to Carrefour supermarket to buy food, use the bathroom, and fill up the tank before leaving town. Once you’re in the dessert, gas stations are few and far between, and the open desert offers no shelter if you need to go to the bathroom.

The drive took four hours. We saw white camels, date palms, signs warning of sandstorms, and men praying on the side of the road next to their cars.

Finding good accommodations in Al Ula had been tough. Being newly famous, the tourist infrastructure just isn’t there yet. We had originally wanted to stay at a camp in the desert, but we found out from the owner that it would be closed for Ramadan, so we chose an apartment on Booking.com that looked new and modern.

It was located in a new development where every villa looked identical. After circling forever, we finally found our apartment, only to discover that it didn’t have wifi, so we messaged the owner that we were leaving and drove into town to look for a hotel.

The first two hotels we stopped at were government hotels, so we weren’t allowed to stay. We were offered the drivers’ quarters, which was a big room in back with questionable bedding. We passed on that and kept driving. It was getting dark and we were getting desperate.

I had seen a brightly lit hotel that looked tacky earlier, but it was open, so we drove back and went in. They welcomed us with wifi passwords and showed us an outrageous royal purple suite. We opted for a more basic room and decided one night would be enough. The staff was super nice, and they ran a laundry service next door, so I felt assured the linens were clean at least.

We tried to buy a ticket to Hegra for the next morning, but this time none of our cards worked, not even the Amex. The Experience Al Ula ticket page seemed to require an advance reservation. Some of the best time slots were already sold out. We tried our cards over and over, emailed, messaged, and called, but nothing worked. In the end we decided to go first thing in the morning and hope for the best.

Turns out you don’t need to reserve tickets in advance, at least not when we went. There were hardly any other tourists. Just drive to Winter Park (not to Hegra), walk across the lawn to the visitor center, and buy a ticket in person. You can pay with a credit card, it’s no issue in person. As soon as you have the ticket, you can board the next bus to Hegra, which takes you to a welcome station.

Here you can enjoy Arabic coffee, dates, and platters of dried fruit while guides briefly explain how your visit will work – buses will take you from site to site, and at each stop a guide will meet you. In total there are 5 stops on the standard tour. Most of them are tombs carved by the same Nabateans who carved Petra in Jordan. We were impressed by how informative the guides were, especially the women, and how good their English was.

The symbols and stories behind the tombs are fascinating. I was surprised to find a lotus motif in the middle of the desert and learned that Al Ula incorporated influences from many ancient civilizations.

The only thing I found strange was how clean and sharp the lines of the tombs were, as if fresh chiseled. How had they not been battered by sand and wind over millenia? When I asked one of our guides, he laughed as if acknowledging the improbability of it, but then with a completely straight face, said the tombs were 2000 years old and untouched.

Some of the tombs off the designated path are in much rougher shape. Unlike Petra, where the facades are protected by canyon walls, the tombs here are completely exposed to the desert.

The sun is so strong I recommend visiting first thing in the morning or in the late afternoon before the site closes. Bring an umbrella for shade (it won’t look strange, lots of people do it) and wear long sleeves and pants for sun protection. Some of our guides even wore gloves.

The sky over Al Ula was also thick with haze from sand or pollution. Some of the desert camps advertise stargazing, but I can’t imagine being able to see a single star through that haze.

There are a couple other places you can visit in Al Ula, but Hegra is the highlight. You can do it all in one day, at most two days. We spent 24 hours there and it was plenty.

Aaron’s recap of Al Ula: Hegra instructions are totally unclear – where to park, how to buy a ticket, what you’ll see, etc.  Incredible payment and online ticketing difficulty.  Accommodations are either woefully outdated or drastically overpriced.  In the range of touristic options in the world, no one is going to pay $500+ / night to camp at Al Ula.

Ten years from now when Hegra is swarming with tourists, we can look back and say, wow, I can’t believe we had the whole place to ourselves, but at the moment, we’ll just say, we were happy to be there, and happy to leave : )