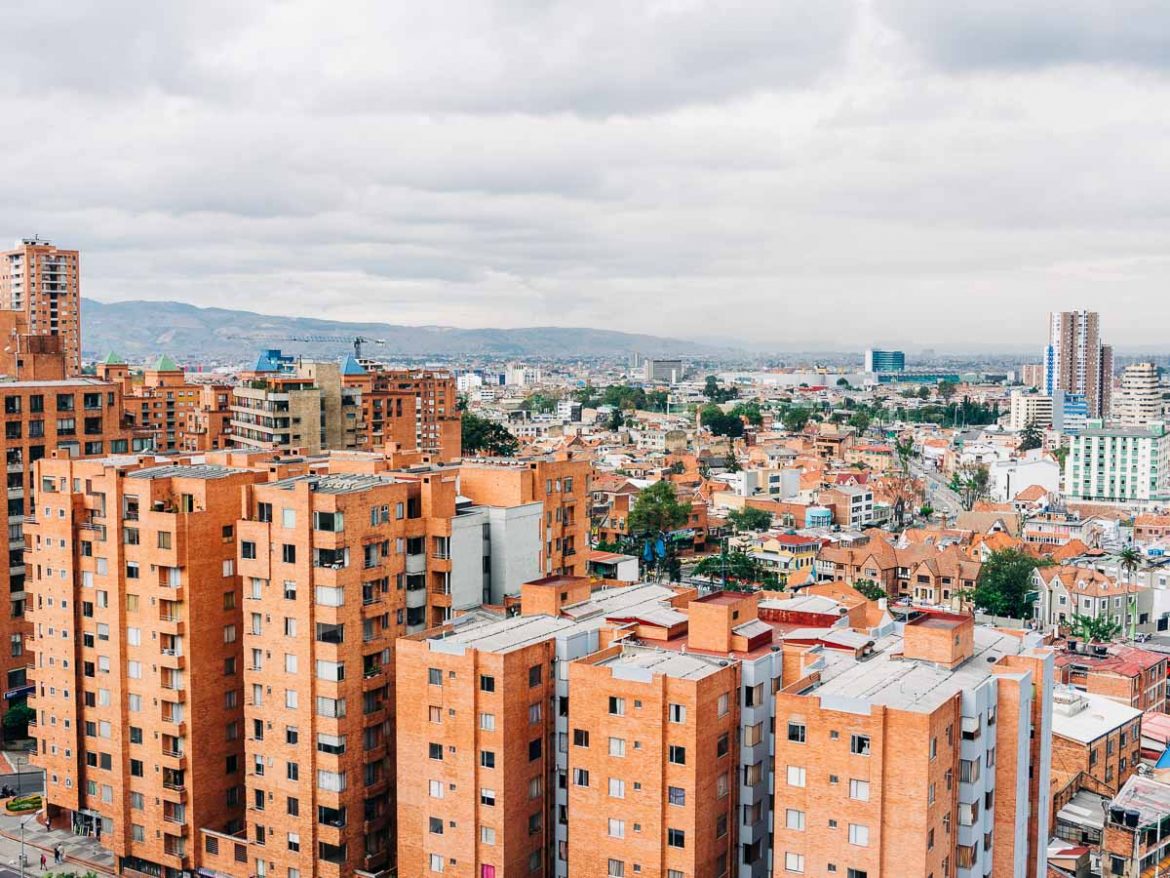 At an altitude of 2640 meters, the climate is much cooler than in Medellin or Cartagena. It’s a good idea to visit Medellin first since it’s at a slight but lower altitude, so you can begin to adjust.

We flew to Bogota from Medellin. From the airport we took the city bus K86 to a central terminal, then switched to the M86 which took us within a short walk of our Airbnb in midtown. You’ll need to purchase a bus card if you want to take the city buses. They don’t take cash.

First time visitors should know these three neighborhoods in Bogota – downtown (La Candelaria), home to the old town and many tourist attractions, uptown (Parque 93), where rich Colombians live, and midtown (International Center), which is where we chose to stay. We found an amazing Airbnb here with 14th floor city views.

Everyone says don’t stay downtown, especially if you plan to be out in the evening. It’s apparently not safe after dark. Uptown is upscale and safe, but quite far from the old town. Midtown is in between, close enough to the old town to walk, but with nicer accommodations in newer buildings and safer. We spotted some riff raff downtown, but in midtown mostly just working professionals going about their day.

Midtown also has its own highlights, including Zona Gastronomica on Calle 30 next to the National Museum, and Sr. Buñuelo, a popular buñuelo shop where you can get a crispy cheese-filled buñuelo stuffed with chocolate sauce, arequipe (dulce de leche), or bocadillo (guava jelly). There’s always a line but it’s worth the wait. Try the queso and chocolate, a combination unique to the Andean region of Colombia. You can also try hot chocolate served with a slice of white cheese, a Bogota specialty.

On Sundays museums are free. We visited the National Museum, which has a few Boteros of its own, and the Gold Museum. The Gold Museum was a zoo on free day, so perhaps it’s worth paying the 4000 peso entrance ticket on a different day.

The Botero Museum is always free in conjunction with a coin stamping museum and a modern art gallery in the same complex. It was our most highly anticipated attraction in Bogota, and it was in a beautiful courtyard style building, but there were fewer Boteros than we expected, interspersed among many other artists.

We thought the Botero collection at the Museo Antioquia in Medellin was better, but the Botero Museum in Bogota does have his rendition of the Mona Lisa.

The old town has a high concentration of churches and cathedrals. Each is quite different. We were particularly impressed with the ornate interior of the Iglesia de la Concepcion, which felt distinctly South American, and the rust red ceiling of the Tabernacle Chapel connected to the larger Catedral Primada de Colombia.

Bogota also has some wonderful graffiti art all over the city, an unexpected surprise.

The one unfortunate thing about Bogota is its poor air quality, due to the many buses spewing black clouds of exhaust. Both our throats stung after a day out exploring. For this reason we can’t recommend staying here too long, just a few days to see the main attractions.

That said, we really enjoyed Bogota, in part because of our amazing Airbnb. The pleasantly cool climate was also a relief after the heat of the Carribean coast and even Medellin. We also liked the bustling nature of the city and the multitude of cultural things to see and do, so we’re very glad we didn’t skip it.

Guide to Salento, Our Cocora Valley Base