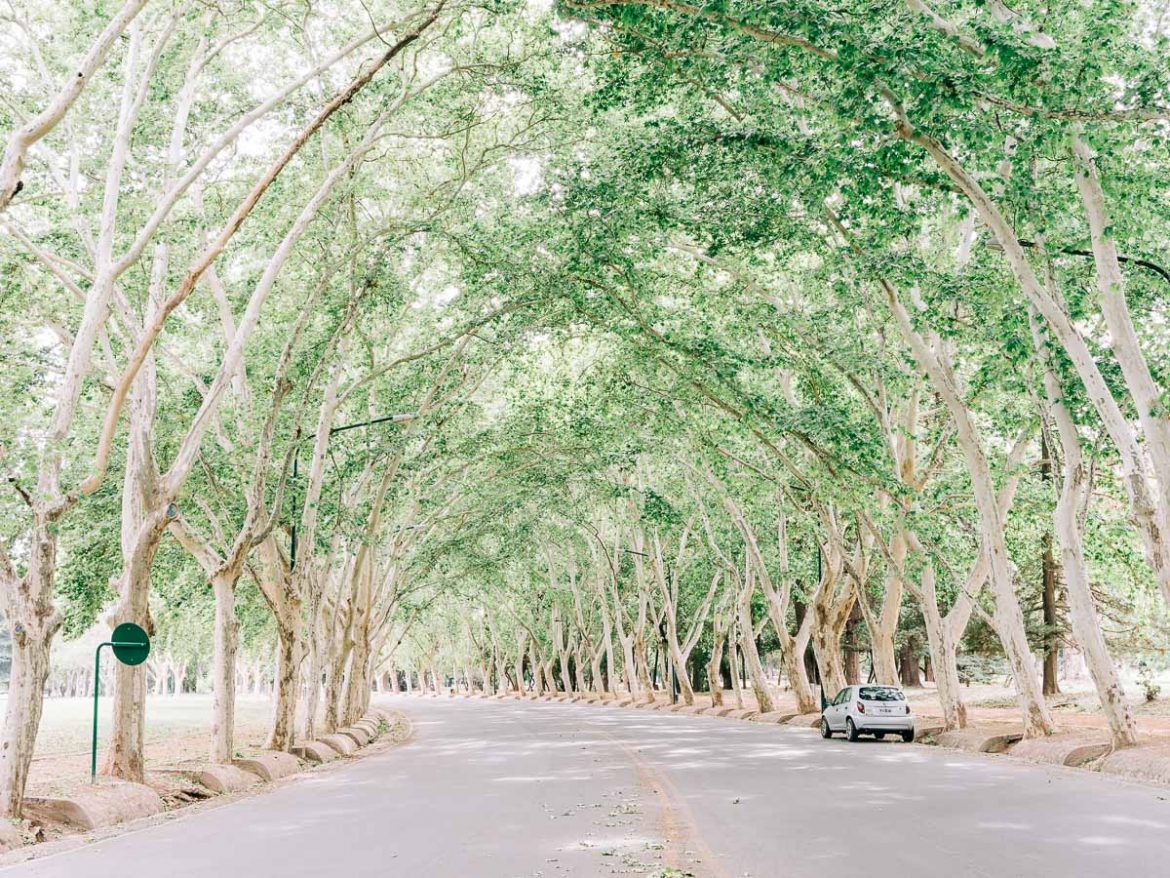 A Guide to Mendoza, One of the Most Livable Places in South America

On a continent that often proved frustrating, Mendoza, Argentina could not have been a more welcoming respite, a food and wine paradise with leafy tree-lined boulevards and the warmest people we met in South America.

Getting In and Out

We flew into Mendoza from Santiago on LATAM by redeeming British Airways miles, and then took an Uber to our Airbnb that only cost $3.

On the way back to Santiago, we took the bus, a popular way to see the Andes. Make sure to book the front seats on the upper level of the double decker bus for the best view. We traveled with a company called Andesmar.

We stayed near Avenida Arístides Villanueva, a lively restaurant street with lots of outdoor dining. It’s next to a big park and has a nicer atmosphere than downtown Mendoza, but is still within walking distance of the city center.

You should come to Mendoza just to experience the warmth of the people here. At the grocery store on our first night, Aaron asked a gentleman in the check-out line if the bottle of wine we had picked out was any good. He ended up bringing Aaron back to the wine aisle (leaving his toddler with me!) to pick out a better bottle of wine. It turned out to be one of the best bottles of wine we’ve ever had, the award winning Altos Malbec 2018, and it was only three dollars. After checking out, this helpful gentleman even gave us his phone number in case we needed anything later on.

On a different day, we were on our way back from a day trip to the vineyards. We had taken an Uber there, but on the return trip no cars were showing up in the Uber app (we were out in the middle of nowhere), so we had to take the bus home. At the bus stop, we saw an elderly lady and asked her if the bus took cash or only a tap card. She said we needed the card, but there was nowhere nearby to buy one, so we told her we would give her the cash if she could tap us on. When the bus came, she tapped us on but then refused to take our money! She didn’t even get on the bus herself, just waved us on with a big smile.

We were so amazed at how generous people were in a country that was in the midst of an economic crisis. We definitely didn’t experience this elsewhere in South America.

Mendoza is surrounded by vineyards as far as the eye can see. We visited two wineries in Luján de Cuyo, a wine producing town on the outskirts of Mendoza. First we went to Carmelo Patti, a local legend, and then Bodega Lagarde, a larger, more commercial producer. Carmelo Patti is a one-man shop. He gets his grapes from his best friend and produces 70,000 bottles of wine a year. He gives a fun introduction (in Spanish only) and a free wine tasting. Bodega Lagarde offers a tour of their cellars and three tiers of wine tastings starting at $10 a person. We enjoyed Carmelo Patti’s wine more, though the bottle of Altos we got at the grocery store on our first night in town was still the best.

We also went to Chinitas Wine Club for a drink in town. Two sisters own this wine bar and they’re a wealth of knowledge. In fact it was one of them who pointed us to Carmelo Patti. She also introduced us to torrontes, a striking white wine made from grapes grown in Salta, a region in the north of Argentina.

After you’ve had enough wine, you can head to Mascalzzone Pizzería for a late night snack. This restaurant makes a variety of fresh baked empanandas oozing with cheese. Argentinian empanadas are different from empanadas in other parts of South America. In Argentina they’re baked, whereas in Chile and Ecuador they’re mostly fried. We recommend getting one of each filling at Mascalzzone to create your own sampler board.

When in Mendoza, try the classic Argentinian cafe breakfast of a medialuna (“half-moon”), a sweet crescent shaped pastry similar to a croissant but less airy and more chewy, with a glass of orange juice. Bröd, a cafe between Plaza España and Plaza Italia with a big courtyard and plenty of outdoor seating, serves fresh-baked medialunas and fresh-squeezed orange juice.

If you have a sweet tooth, don’t miss Essenza Pastelería. Everything there is decadent and high quality. If you can’t decide, the pastry chef will patiently explain all the different flavors to you. For empanadas and great focaccia, we recommend Panadería Trigal.

Back in town, we discovered an amazing gelato shop, seriously as good as any in Italy. Famiglia Perin is a family-run ice cream parlor. We met the granddaughter, who told us that her grandfather moved to Argentina from Italy in 1947 and started this gelateria.

In a country known for steak, Mendoza’s vegetarian restaurant scene is surprisingly good, with a number of affordable weighable buffets as well as sit-down restaurants. There are at least a dozen near the city center – just search “vegetarian” on Google Maps. Our favorites were Cuenco Vegano and Govinda Vegetarian. Both are clean and healthy.

As for non-vegetarians, Aaron assures me the steak is incredible.

We stayed next to Parque San Martín with its broad tree-lined streets leading to the Fountain of the Continents. Mendoza is actually quite dry, but has a special underground irrigation system to water its trees, so the city is very green.

On the other side of town are a series of squares with beautiful tiles and lanterns, especially Plaza España.

To see an old Argentinian mansion, stop by the Carlos Alonso Museum. It’s a well-preserved house turned into a museum with changing art exhibits.

Going to the Dentist

We even had one of our best dental cleanings with a dentist in Mendoza. He went to dental school in Texas, so he speaks perfect English. His father and brother are also dentists in the same clinic. For interested long term travelers and digital nomads, their office is called Clínica Caram, and it’s located on a residential street not far from the center of town.

Mendoza holds a special place in our hearts. It’s definitely in our top three. We plan to return in October or November one year in the future and spend the spring season here while waiting for a last-minute Antarctic cruise deal. We can’t think of a better place in South America to spend a few months just living our life.

Packing Super Light for a Trip Around the World

thanks for a great trip report – sounds amazing – adding to my list! question for you…you said Mendoza was the friendliest place on your SA adventure…I know you went to colombia…not as friendly? We have been to ecuador, colombia, peru and just had a cancelled trip to chile – thinking about doing a year in SA in the very near future!

Hi Lacey, Colombia was friendly enough but Mendoza was just on another level! We’ve traveled all over the world and we were totally blown away by the hospitality. Btw don’t miss the lakes district in Chile – that was our favorite 🙂

Mendoza is indeed a special place