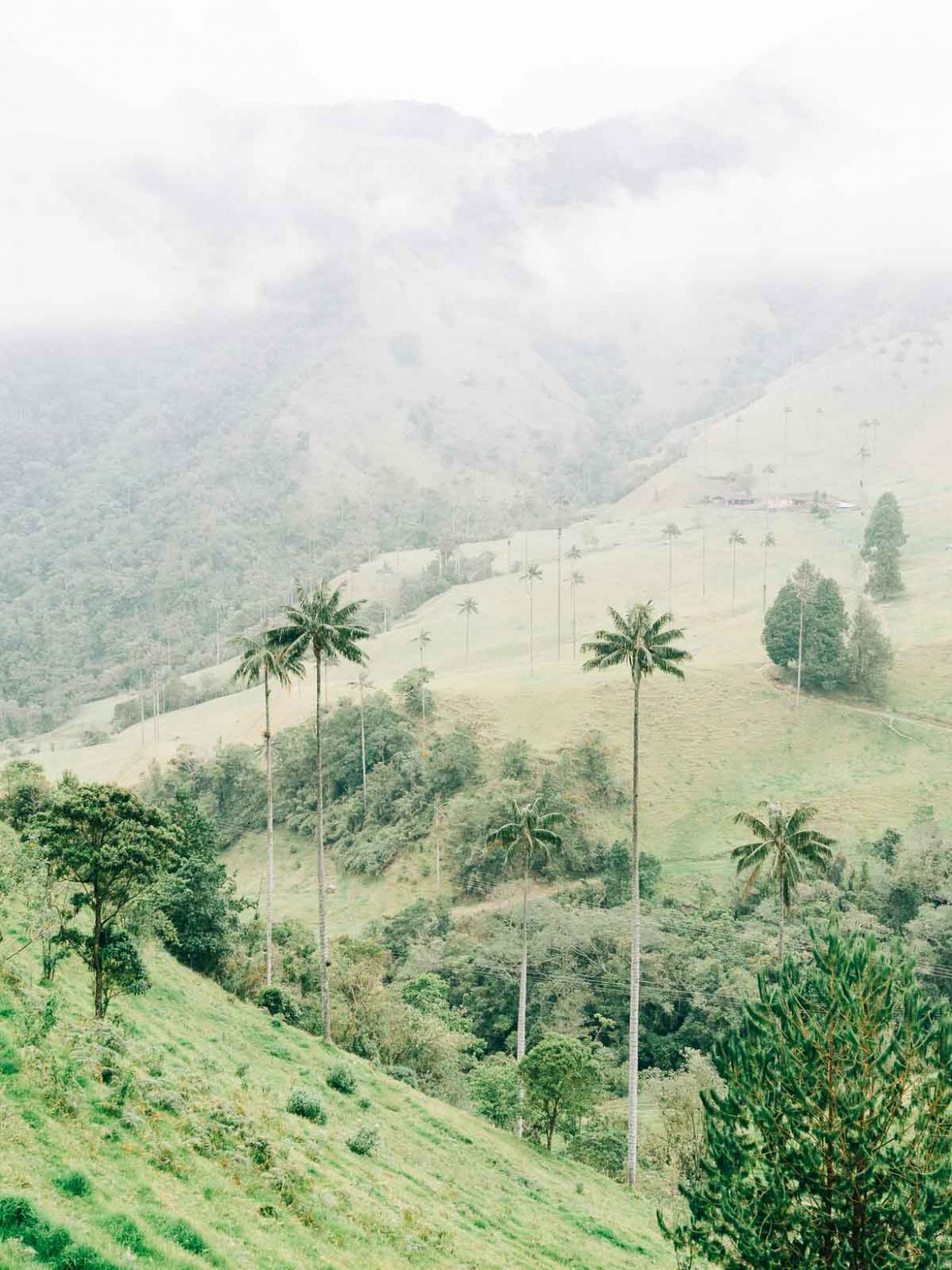 That’s why we’re writing this post – so you don’t get lost like we did. Let’s start with this trail map we came across only at the end of our hike.

The first thing we realized when we studied this map was that for the first 3 hours of our hike, we were off the edge of the map altogether, in pretty wild territory. No wonder we saw a puma warning, but we’ll go into that later. Let’s start from the beginning.

The vast majority of visitors stay two nights in the small, charming town of Salento and take a shared Jeep to the Cocora Valley from the town center in the morning. The Jeeps leave at 7:30am, 9:30 am, and 11:30am, not on the dot but as they fill up. The last return trip is at 6:30pm.

You can buy tickets at the pink kiosk in the town square, which is simply called Parque. You can’t miss it; there will be a short line and colorful Jeeps parked all around. As of February 2020, a round trip ticket costs 8000 COP per person.

We did meet one Colombian couple who drove their own rental car and camped near the palm forest, so that’s a possibility too.

The Jeep ride takes about half an hour. Once you’re dropped off, you’ll start walking with everyone else down a wide dirt path. At this point, all the travel guides say you can either go straight, or you can go to the right through a blue gate.

But actually, both trailheads go to the right off the main road; the one through the blue gate is simply first. I’ve circled both trailheads in orange below. As you can see, you have to take a right turn at some point.

Our mistake was following the advice to “go straight” literally and basically walking off the left edge of the map. Since you have this trail map now, that won’t happen to you.

If you enter through the blue gate circled on the right, you’ll embark upon a 5 hour hike that crosses 7 bridges, takes you to the hummingbird reserve in the top right corner of the map, across to Finca la Montana, then down the path with blue arrows through the palm forest.

If you want a shorter 2 hour hike, keep walking past the blue gate until you reach the second entry at Bosque de Palmas (circled in orange on the left). You’ll come to a house that looks like this.

Walk up these steps and pay the entrance fee. From here you can follow the red arrows up and the blue arrows down to see just the palm forest. You can also take the red arrow trail up and then keep going across to the hummingbird reserve and down to the blue gate.

You’ll have to pay again at the trout farm on your way down which is a bit ridiculous; we met a couple who reported this was the case.

There are three checkpoints where you pay an entry fee or show your wristband – entering Bosque de Palmas, at the trout farm (La Truchera), and at a gate near Finca la Montana. Depending on the trail you take, you’ll likely only encounter two.

The fees are 4000 COP at each checkpoint, but you only need to pay for two at most. At La Truchera and Bosque de Palmas you’ll get a wristband.

The hummingbird reserve (Acaime) is an extra 5000 COP if you choose to stop there.

We were lucky it turned out to be the dry season in February (unbeknownst to us) and hadn’t rained the night before our hike. The trail was dry and even dusty at times, but it can turn muddy quickly, especially on the 5 hour loop, a large portion of which follows a river.

Even in the dry season, it often rains by 11am most days, so we recommend taking the 7:30am Jeep if you can and starting your hike at the Bosque de Palmas entrance so that you can see the palm forest first, and then decide if you want to do the 5 hour loop or the 2 hour loop based on the weather forecast and the condition of the trail.

Bring water, a rain jacket, and a snack. The trail was more strenuous than we anticipated, due to the altitude and steep inclines, and we were quite winded on the way up. Hiking poles would have helped.

Now, What Happened to Us?

Well, we didn’t know that “go straight” meant entering the trail at Bosque de Palmas, so we kept walking past the white car and straight off the map. This led to a trail, but it wasn’t marked at all, even when the path split, and it was quite overgrown with brush and fresh spider webs.

We entered cloud forest near the summit. It started to drizzle right as we finished our steep ascent and we walked into an ethereal mist at the top. It was cold and we were afraid of a downpour, but luckily the rain held off for another hour.

After several wrong turns and backtracking, we eventually made our way up to a point near Finca la Montana, where we were finally greeted with the first signpost we’d seen all day and our first view of the valley.

At Mirador 2, where the palms are tightly clustered and many tourists stop to take photos, we decided to go off the main path and down into the valley.

What we didn’t realize was we had set off on the horse trail. It dawned on us when we walked right into a traffic jam of horses. If this happens to you, just step up on the bank and let the horses pass.

If you want to go off the main tourist path, the trail we took is on maps.me. Keep walking straight, past both trailheads, and make your way up and over to the path just below Finca la Montana.

When you reach the signpost, take the path to the palmas. It will widen and you’ll pass through a gate where you pay 4000 COP. The palms will begin to appear at scenic viewpoints. At the second one, walk down into the valley and descend via the horse trail.

You can even backpack the region. On one of our wrong detours we passed a German couple with their local guide who said the direction we were going in led to a 3 day hike they were returning from.

This is the bridge we inadvertently crossed into backpacker country.

How Did it Turn Out in the End?

We were alone on so much of the trail, except for the horses, that we felt like we might be trespassing on private property at times, but eventually the horse trail met up with the blue arrow trail and we made our way back to the Jeep just before it started to pour, exiting at the Bosque de Palmas trailhead.

The palm trees here can be as tall as the leaning tower of Pisa. Wherever you are in the valley, they’re a sight to behold.

We only ended up paying 4000 pesos once instead of twice on our entire hike, a hilarious silver lining as it’s only a couple dollars.

The biggest lesson we learned is that there are multiple trails in this park. Personally I wouldn’t have minded a second day to return and fully explore.

Despite being geographically confused, we still had a great time, mostly by having a sense of humor about it. And the scenery didn’t hurt.

Don’t forget to read our guide to Salento, a great base for visiting the Cocora Valley. We loved this cheerful little town that made our stay in this region very comfortable.