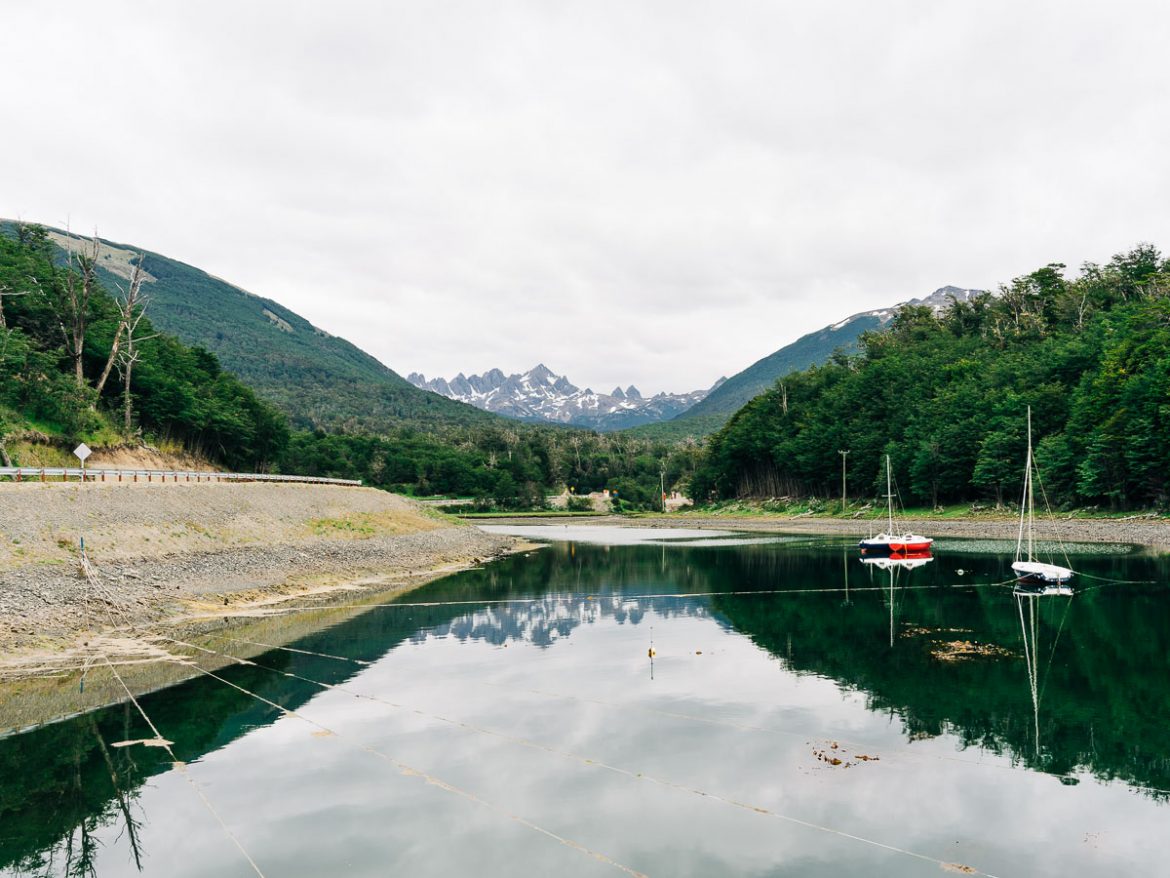 It’s becoming more well-known as the starting point for two major adventures, sailing around Cape Horn and trekking through the island’s mountains, which are called Dientes de Navarino, meaning the teeth of Navarino, so named for their jagged peaks. Chileans call this place fin del mundo, the end of the world.

The summer tourist season is short, lasting just a few months from December to March; in the winter the entire island is blanketed in snow. Everyone on the island knows each other. Some expats from Europe have settled here, seeking tranquility in remoteness.

We thought it would be neat to spend New Year’s Eve here. We stayed three nights, which was enough to do everything we came to see.

You can get to Puerto Williams one of two ways – by flight or by ferry. DAP Airlines operates daily flights to Puerto Williams from Punta Arenas on the Chilean mainland, except on Sundays. The flight takes 45 minutes and costs $100 each way or $200 roundtrip. On a clear day, the views from the plane are pretty spectacular.

The ferry takes thirty to forty hours and doesn’t cost much less for foreigners, so we recommend flying, though one advantage to the ferry is that it navigates through some of the most remote parts of the southern hemisphere. There are no beds on the ferry, just seats. Mostly locals take it to transport large quantities of food back to Puerto Williams, as grocery stores are quite limited in their offerings on the island.

From the airport you can either walk into town like us, or you can take a shuttle to your hotel for 2500 Chilean pesos per person. If you’re taking the shuttle, make sure you arrange to get picked up for your return flight. Ask your hotel to call the day before.

There are only a few hotels in Puerto Williams; after researching all of them we chose Hotel Fio Fio, which turned out to be really nice. The rooms are clean and warm with comfortable king-size beds. It wasn’t cheap at $127 USD a night, but some of the other lodges are even more expensive.

The owners, a husband-wife duo, staff the reception desk themselves and are a wealth of information not just about the island but the entire Magallanes and Antarctic region. Maurice, the husband, works on board Hurtigruten cruises to Antartica and is the former director of the Anthropological museum next to the hotel.

Pictured below is the breakfast room. Breakfast is included, with eggs, granola, yogurt, juice, bread, butter and jam, ham and cheese, and whole fruit.

One of the most popular places to eat on the island is Pizzeria Kanasaka, a “clandestine” restaurant where Isabel, a French expat, makes expert pizza with locally available ingredients, including beaver sometimes. We loved that there were two vegetarian pizzas on the menu, both delicious. It’s clandestine because it doesn’t have a restaurant license; you basically just walk into Isabel’s kitchen and dining room, but because of that, you can bring your own beer or wine. All the locals on the island come here for pizza, even the police.

For casual dining we also went to Resto del Sur. They have a huge menu, but we recommend the king crab ravioli with white sauce – this is the best combination. Puerto Williams is famous for king crab fishing, so while you’re here it’s a must try dining experience. They also make huge salads, which can be a godsend anywhere in Chile but especially in this remote corner. The lemon merengue pie is also amazing, the best I had in Chile.

Sea Kayaking in the Beagle Channel

We highly recommend booking an afternoon tour with Explora Navarino to kayak with Jorge, the founder and an avid kayaker. Originally from Spain, Jorge has been living in Puerto Williams for several years now. He has both single and double kayaks and provides wetsuits, boots, lifejackets, and waterproof smartphone cases.

He can take up to four people at a time. The cost is $80 USD per person, though it can be cheaper to pay in Chilean pesos. We paid 45,000 Chilean pesos per person, which is just shy of $60 USD.

Jorge will pick you up at your hotel. You just need to be ready to paddle for two hours. It’s a good workout but not too strenuous. You’ll kayak to a birdwatching point, where on a lucky day you might see penguins. We saw four just before they dove into the water.

After kayaking, you’ll be invited to have some locally brewed beer and snacks in this bus that’s been turned into an RV of sorts. You can chat with Jorge and ask him a lot of questions about the island.

The island is home to a five day trek called the Dientes de Navarino Circuit, which people fly in from all over the world for, but it’s strenuous even for experienced hikers. Luckily you can do the first leg of the trek as a day hike to Cerro Bandera, a viewpoint marked by the Chilean flag. The hike is steep but can be done in an afternoon, and there are a few good viewing platforms along the way from which you can see Tierra del Fuego across the Beagle Channel, as well as Argentine Patagonia and Ushuaia to the far left.

Learning About the Indigenous Yagán People

The anthropology museum is beautifully curated and shows artifacts from the seafaring indigenous people on the island before it became part of Chile. The descriptions are only in Spanish but you can still get a sense of indigenous life by looking at the artifacts. Today, not many Yagán people are left on the island anymore.

Even in the summer, the weather is cool, cloudy, and windy, with frequent rain. We had one exceptionally fine 70 degree Fahrenheit day, sunny with calm waters, on the day we kayaked, but our guide emphasized how rare and lucky that was. At night we kept the heat on in the hotel.

Ukika Park offers a nature trail where you can spot hawks, and in the Yacht Club there’s a ship you can climb aboard for a picturesque view of the mountains with boat reflections in front.

For the more adventurous, Puerto Williams is also a jumping-off point for fly-fishing, heli-fishing, sailing to Cape Horn, or trekking the full Dientes de Navarino Circuit. You’ll need to join a tour to go heli-fishing and an expedition or cruise to round Cape Horn. To see if you want to do the Dientes de Navarino Circuit, you can watch some videos on Youtube first. It can also be done as a one day trail run, organized by Explora Navarino every December.

How Much Does It Cost?

Of course that depends on the activities you’ll be doing and how long you stay, but you can at least budget $200 for a roundtrip flight from Punta Arenas and $100 a night for hotel accommodations. Food is about twice the price it is on the mainland.

Trekking is free in that there aren’t any national park or campsite fees, but most people doing the circuit stay in a hotel on the front end and tail end. We met a French couple at our hotel who had just finished the five day trek, and they’d brought all their freeze-dried meals from France; they said it was cheaper than getting it in Chile, so that’s a thought. We also brought our own snacks, like nuts and apples, from Punta Arenas.

In total, we spent about $1000 USD for the two of us for a three night stay, including flights, hotel, meals out, and kayaking.

A Guide to Mendoza, One of the Most Livable Places...