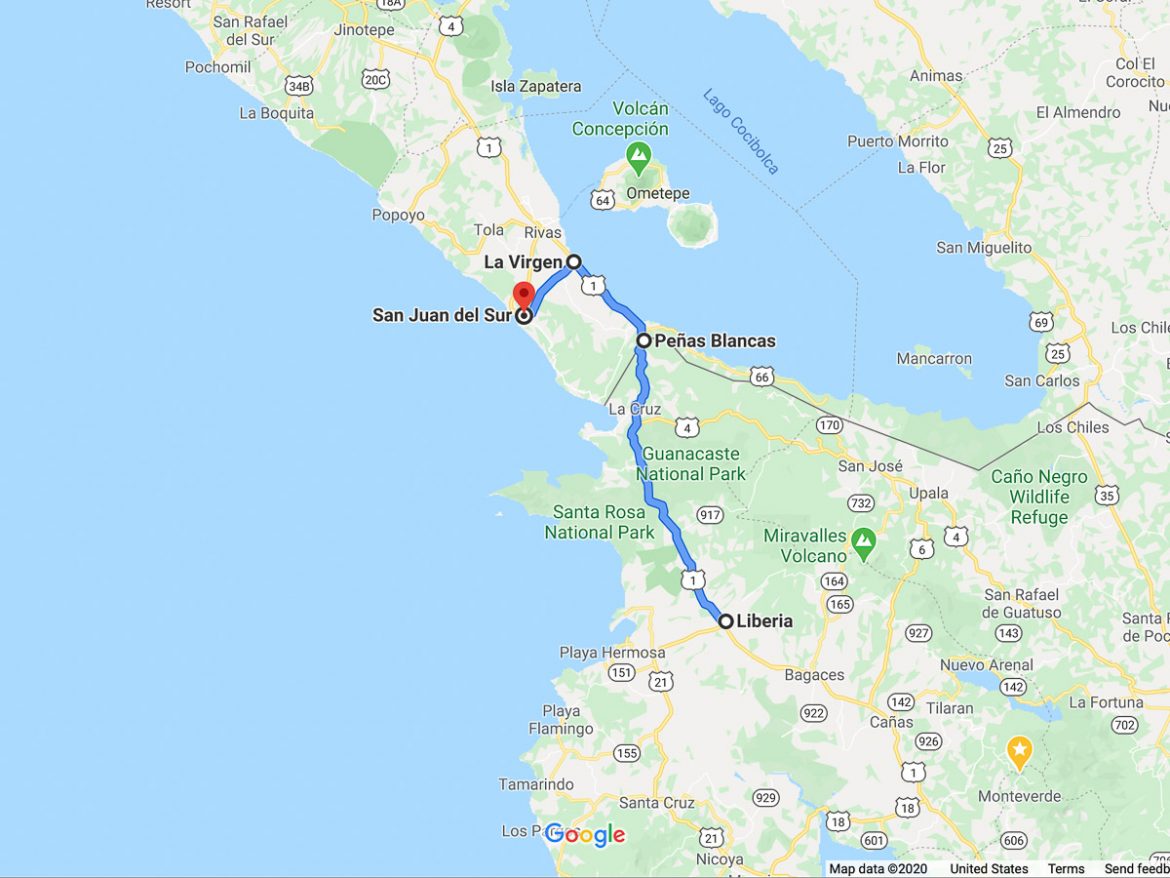 We flew into Liberia, Costa Rica on a COPA Airlines flight from Panama City. Our plan was to cross over into Nicaragua immediately, then visit Costa Rica on our return journey, since we were flying back to the US from Costa Rica.

We crossed the border at Peñas Blancas – this is not the only border crossing over land from Costa Rica to Nicaragua, but it is the most used one.

If you’re on a long range bus from San Jose, Costa Rica to Managua, Nicaragua, you’ll go through this border as well, but the bus will handle passport control for you. We did the border crossing independently, so this post is most useful for others doing the same.

Taking the Bus to Peñas Blancas

From the Liberia airport, we took an Uber to the municipal bus terminal in Liberia. The ride takes about 20 minutes. There are two bus terminals close to each other, so make sure you get dropped off at the right one.

Taxis will work hard to secure your business and charge upwards of $20 for this route. Public buses cost 500-600 CRC (Costa Rican Colones) – about $1. They run regularly but we chose not to wait for one because we were on a tight schedule. While Uber has tenuous legal standing in Costa Rica, we were able to grab one for $7.50.

At the Liberia Municipal Bus Terminal, take the Grupo Transbasa bus 521 to “la frontera” (the border). Here’s the schedule. The bus leaves every 45 minutes from 5 AM to 6:30 PM. Tickets are paid in cash to the driver and cost 1750 CRC. The trip takes about 1.5 hours.

At the border, exit Costa Rica. We got off the last stop on the bus and entered the only large building in site. Inside, an immigration official reviewed and stamped our passport. Our Costa Rican officer spoke English. The Nicaraguan staff did not.

When we got off the bus, we were immediately greeted by a money changer, so we changed some dollars into Nicaraguan currency. We usually never do this but there were no ATMs in sight. The money changer kept a dollar for himself but otherwise gave us the market rate and none of the bills turned out to be fake.

Proceed across the border on foot. Ignore offers of assistance. You will be asked to show your passport a few times. Only do so for police and uniformed officials. Don’t let anyone walk off with your passport. One official tried to do this and we made it very clear we were not parting with our passports.

We had a bit of trouble at the second to last checkpoint. A doctor came running up to us, asked if we had a fever, looked through our passports, and asked to see our yellow fever vaccine cards, which we didn’t have on us.

Nicaragua requires yellow fever vaccination certificates if you’re coming from a country with a risk of yellow fever transmission. Colombia is one of these countries. Our recent stay in Colombia merely 5 days earlier was the issue.

Initially we were told we would have to stay in Costa Rica for 7 days before entering Nicaragua. We protested and this went on for about half an hour. Meanwhile, a few other people passed through without being asked to show their yellow fever cards.

At one point one of the officials asked us how much cash we had, to which we answered not much. We’re not sure if he was suggesting a bribe. We did see one foreigner give another immigration official a beer and he was let through immediately. In the end, we were let through too, but it was all pretty sketchy.

Long story short, make sure you have your yellow fever card.

Once clear, you can take a taxi to San Juan del Sur for $20, or make a hard left turn and walk about 200 meters until you see some yellow school buses and drivers shouting “Riva Riva Riva!” Confirm that the bus is going to Rivas and get on – it’s literally an old American school bus, the kind we rode as kids. You might be the only foreigner on board. You’ll be charged 30 NIO (Nicaraguan córdoba). Locals pay 20.

Switch buses at La Virgen, a fork in the road, and wait for the next bus to San Juan del Sur, your final destination. We only had to wait a couple minutes. Pay another 30 córdoba. The bus will drop you off right outside the market in the center of town.

To return to Costa Rica, retrace your route to Peñas Blancas. From here you can board buses to Liberia or elsewhere in Costa Rica.

We headed on to Monteverde, an ecotourism destination in Costa Rica, for zip lining and nature walks in the cloud forest.