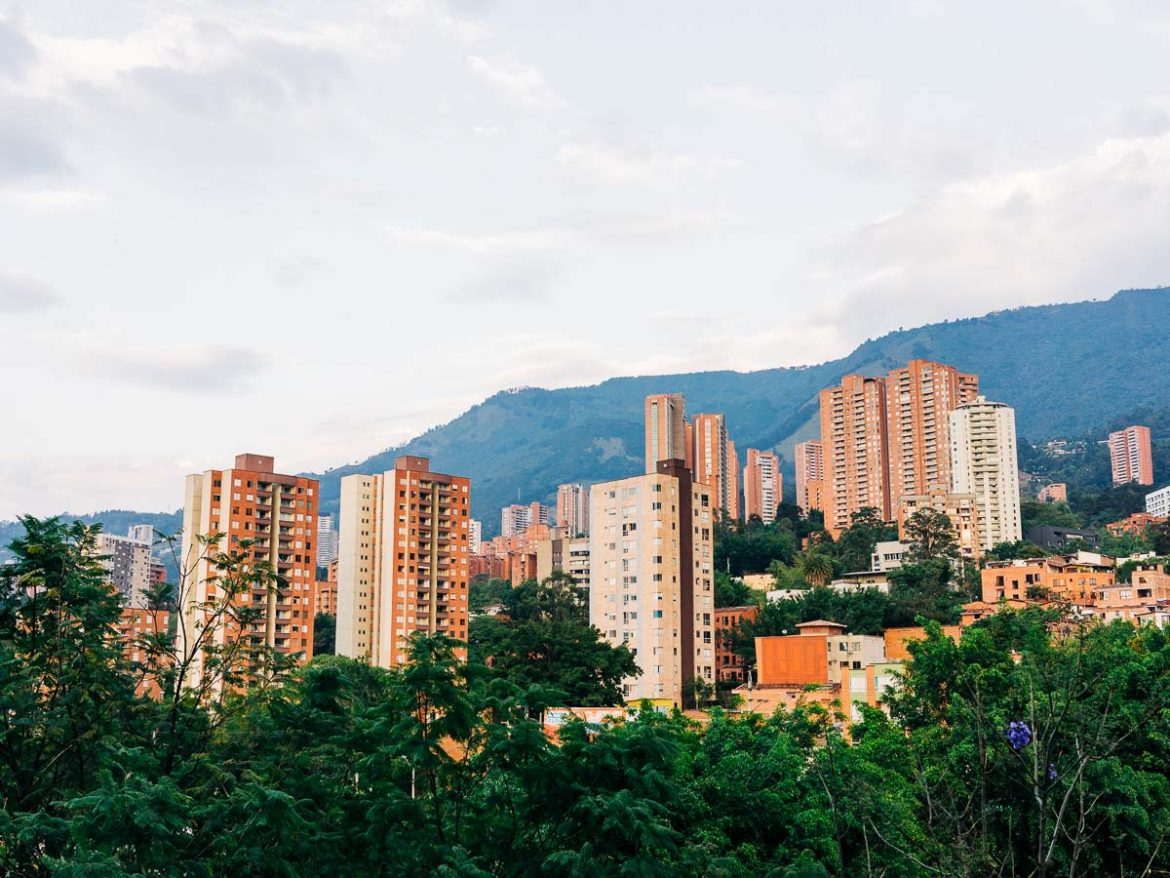 From Cartagena we flew to Medellin, Colombia’s city of eternal spring set in the lush Aburrá valley. Once the most dangerous city in the world in the 1980s, Medellin has transformed itself into the most innovative city in the last decade. It’s now an expat hub and tourist destination with a fast-growing economy and one of the best public transit systems we’ve ever encountered. As long as you exercise street smarts (don’t flash your smartphone in public), Medellin is pretty safe.

From the airport we took the white shuttle buses parked right outside the terminal to the city center, where we called a cab to our Airbnb using the inDriver app, which lets you make offers for rides. As of February 1, 2020, Uber has exited Colombia. Taking a cab all the way from the airport would have cost 75,000 pesos; the bus is only 10,500 pesos per person.

We liked Medellin immediately, pleasantly surprised by how green it was even amongst the urban density. It’s an absolutely huge city that goes on farther than the eye can see, but fortunately it’s well connected by a modern metro system, the city’s pride and joy. Along with cable cars, the metro connects all the city’s different hillside communities.

We stayed just north of El Poblado, an affluent neighborhood popular with expats. It’s far calmer than the center of the city and is well connected with its own metro stop. The leafy tree lined streets, restaurants, cafes, and new apartment buildings command a higher price, but we felt pretty safe walking to our apartment even after dark.

The climate in Medellin is cooler than in Cartagena or Santa Marta. We visited in early February. Midday was still quite warm at 85°F but evenings were pleasantly cool. At night we kept the windows open to cool the house down. Most buildings in Medellin don’t have air-conditioning for this reason. Luckily we only encountered a single mosquito during our entire week.

We came to Medellin to see Boteros, learn about the city’s troubled history with drug cartels, and see how it’s thriving today. Our favorite museum in the city was the Museo de Antioquia, which houses a large collection of paintings and sculptures donated by Fernando Botero, one of the world’s most famous living artists.

The museum is housed in a beautiful courtyard building in Plaza Botero, surrounded by 23 sculptures by the Medellin native whose signature style depicts fat people, animals, and even fruit. How can an orange be more round? It’s magic.

Near Plaza Botero we met up with Real City Tours for their tip-based free walking tour of downtown Medellin. This informative tour is essential to understanding the city. We learned how violent Medellin was during Pablo Escobar’s time, why the metro is a beloved symbol of the city’s revival, how democratic architecture transformed the city, and the state of Colombia’s cocaine production today.

It was one of the most memorable walking tours we’ve ever been on (out of 20+), but quite long at four hours, so devote half a day, or if you travel slow like us, an entire day.

The best way to see how big Medellin is to take one of the cable cars. One popular route is from Acevedo to Parque Arví. You only have to pay for the metro once, and then it’s a free transfer to the cable car. You can then visit Parque Arví or just ride the gondola back down.

One really popular hillside neighborhood is Comuna 13. Once a criminal part of the city, it’s now safe and quite touristy, revitalized by colorful graffiti art, hipster coffeeshops, and outdoor escalators to get you up and down the steep hillside.

While hiking around Comuna 13, stop by Cremas Doña Consuelo, a popsicle shop selling homemade mango, coconut, passionfruit, and soursop ice pops for 2000 pesos each. You eat them dipped in salted lemon juice. They’re deliciously refreshing on a hot sunny day. From the top of Comuna 13 you can also get a sweeping view of the city below.

Medellin is a culturally rich place with a lot to explore. We could spend a month in El Poblado alone just eating our way through all the restaurants. It’s easy to see why so many expats have chosen to live here.

Guide to Salento, Our Cocora Valley Base