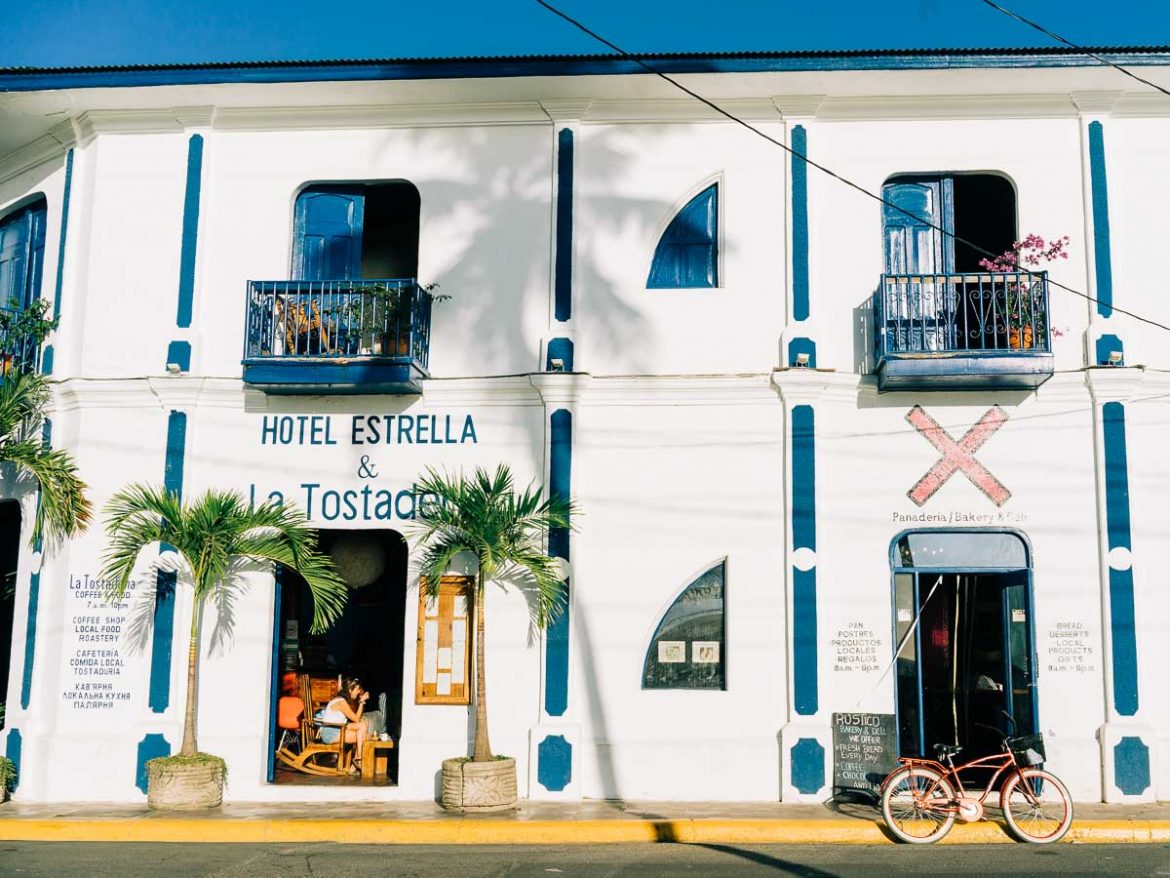 The town of San Juan del Sur is quite poor. A few years ago, the promise of tourism led to a surge in luxury developments, but then tourism collapsed, so mansions perched high on the hillside sit empty while people live in makeshift tents below. Rows of blue and white Santorini-style houses on the dusty outskirts of town look abandoned, a classic case of a real estate boom and bust. You can find many of these places on Airbnb now.

While it’s possible to fly into Managua, Nicaragua’s capital, it’s actually cheaper to fly into Liberia, Costa Rica, and cross the border into San Juan del Sur from there. Follow our exact route here.

We found a very modern Airbnb to stay in, owned by a Canadian woman. The only downside was there was no hot water, a recurring trend for us in this part of the world. But there are plenty of other Airbnbs, including some very luxurious villas, mostly foreign owned.

In addition to Airbnbs and hotels, there are also plenty of hostels in town catering to the backpacker crowd.

Gelateria SUPERFRUTTO is the gem of San Juan del Sur in my opinion. Somehow this tiny town was able to make authentic Italian gelato as good as any we’ve had in Europe. A double scoop costs 65 córdoba (about $2) and a triple scoop 100 córdoba (about $3). We tried the pistachio, coffee, and chocolate, all rich and naturally flavored. For this ice cream alone I could stay longer in Nicaragua.

The bakery next to Hotel Estrella & La Tostaderia has fresh baked artisan bread, cinnamon rolls, and complimentary coffee every morning. We weren’t expecting to find such good bread in Nicaragua.

There are plenty of restaurants to choose from, but if you want to cook, the biggest grocery store in town is Pali. Their selection of fruits and vegetables is limited, but it’s all unbelievably cheap (20 cents for a plantain), and the watermelons are really good.

The biggest tourist attraction nearby is Volcán Concepción on the island of Ometepe. We saw the volcano on the drive in from Peñas Blancas to La Virgen. You can take a ferry from Rivas and hike the volcano with a guide (which is required). If you want to stay overnight, there are many treehouse type accommodations in Ometepe.

The climate in San Juan del Sur is oppressively hot year round, so it’s best for people who don’t mind the heat. There’s also a windy season from January to March. We were there at the end of February, and gale force winds pelted us with sand every time we walked across the beach – it really stung our legs.

Even though San Juan del Sur is a beach town, the sand is not that nice. The surfing is supposed to be good, but we didn’t see any surfers while we were there – probably not the right season.

The sunset view from the beach is absolutely gorgeous, but our Airbnb host told us not to walk outside after dark, especially on the beach, where shadowy characters would be lurking about.

For now, San Juan del Sur remains off the beaten path. Coming here made us feel quite intrepid, and we’re glad we came – every country, good or bad, is a learning experience – but in all honesty, we won’t be rushing back. It’s most ideal for people who prefer to live off the grid. We live simply but we like hot showers and a bountiful selection of produce too much. Even the best grocery store in town was limited to just a few types of fruits and vegetables.

Visiting for a few days was interesting though, because there aren’t many places in the world this underdeveloped anymore. It also felt mostly safe. The locals were friendly, and we didn’t witness any of the political strife that has roiled other parts of Nicaragua, so for now, it seems calm enough to visit.

More information on traveling to Nicaragua:

Packing Super Light for a Trip Around the World